As more and more tech-savvy travelers educate themselves about what inflight mobile connectivity systems actually do – and realize these systems can support mobile texting and data whilst disabling voice – the tsunami of public outrage over the prospect of allowing the use of cell phones in-flight is receding ever so slightly.

In a remarkably measured article, which contrasts to some of its previous, more sensationalist fare, the Huffington Post reports: “The FCC’s task is a narrow and technical one: It is to determine, from an engineering perspective, if more expansive inflight wireless services interfere with mobile network operations on the ground. The threat of such interference was the basis for the ‘cellphones off’ rule we live under today.”

Legislating manners is certainly not the FCC’s role. But, as previously reported on Runway Girl Network, the inflight cell phone debate is a red herring. Passengers want the ability to use mobile data on their cell phones, even if they eschew voice. Listen to the very first episode of Runway Girl Network’s #PaxEx Podcast to learn about ways to satiate lawmakers, passengers and airlines on this issue.

“Overall the thing I take as most positive from this is it could provoke a reaction from the cellular operators and from the handset manufacturers, which should logically improve the ability of phones to seamlessly integrate with our environment, through handset software and back-office integration,” says John Guidon, chief technology officer at Global Eagle Entertainment (GEE), whose Row 44 unit supplies inflight Internet to Southwest Airlines and other non-US operators.

“This would mean we streamline the experience to the point of transparency – eliminating much of the inconvenience involved, such as entering credit card numbers and so on. That would be huge for service providers like Row 44/GEE.”

Meanwhile, some US operators are currently quietly looking the other way when their passengers make VoIP calls over inflight Wi-Fi systems. Why? Because people are generally not complaining. That’s not to say everyone is pleased. “I recently flew on Virgin American and the nice guy next to me was talking the whole flight from San Francisco to LAX. It was terribly annoying,” says a commenter on YouTube.

JetBlue Airways – which has launched its new, superfast Ka-band satellite-supported inflight Internet system – will allow VoIP calls for the time being, company SVP of marketing and commercial Marty St. George confirmed to Runway Girl Network on the carrier’s promotional launch flight of the so-called Fly-Fi service. 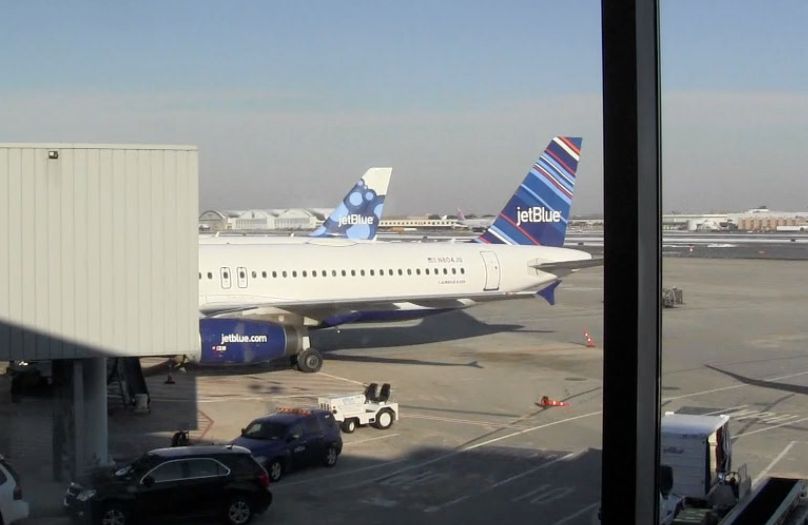 However, St. George noted: “We do think we’ll [eventually] have prohibition on Skype [a VoIP service].  The feedback we’re getting from customers is that they’re not real comfortable with voice communications on the airplane. I think when the notice came out about … possibly using cell phones at altitude, the statement we made at the time was, ‘We want to be a customer responsive airline’, and I can tell you that customers are divided and divided pretty violently.”

“Over the past few weeks, we have heard of concerns raised by airlines, travelers, flight attendants, members of Congress and others who are all troubled over the idea of passengers talking on cell phones in flight – and I am concerned about this possibility as well,” says Foxx.

“As the FCC has said before, their sole role on this issue is to examine the technical feasibility of the use of mobile devices in flight. We believe US DOT’s role, as part of our Aviation Consumer Protection Authority, is to determine if allowing these calls is fair to consumers. US DOT will now begin a process that will look at the possibility of banning these inflight calls. As part of that process, US DOT will give stakeholders and the public significant opportunity to comment.”

So it seems likely that inflight GSM systems (the likes of which are provided by OnAir and Panasonic, and GEE is testing) will be given the green light, but with voice functionality disabled. And what of VoIP? Presumably the DOT is referring to all voice call.

Meanwhile, a total four JetBlue Airbus A320s are fitted with the Fly-Fi inflight Internet service, and the carrier will start fitting 15 aircraft per month from January. Fly-Fi is provided via a partnership between JetBlue unit LiveTV and satellite operator ViaSat. If JetBlue does not receive complaints about VoIP calls – and a federal ban is not implemented – the airline may consider permitting VoIP longer-term.

“The one thing we have going for us is the JetBlue customer trends a little younger, a little more affluent than the typical customer…voice is not quite the killer app it once was. I think we have to see. I would never say never either way. I would not say we won’t allow phones and I won’t say we won’t.”

LiveTV CEO Glenn Latta says if the FCC ultimately permits inflight mobile connectivity, the company has the capability to upgrade JetBlue’s aircraft with the appropriate ‘pico cell’ and leaky feeder line equipment to support the service. And yes, it could enable JetBlue to offer text and data without enabling cell phone calls.

See how Fly-Fi can support high-bandwidth functionality like VoIP in the following video: