Analysis by leading space consulting and market intelligence firm Euroconsult shows a 10% increase in the number of commercial aircraft connected to in-flight services compared to 2020, totalling 9,900 planes by the end of 2021. Within the next decade, the number of aircraft using such services is expected to double to more than 21,000.

In its latest industry analysis ‘Prospects for In-Flight Entertainment & Connectivity’ Euroconsult says a strong year-on-year performance for 2021 contrasts with previous uncertainties in the aviation industry and its supply chain, one of the most seriously affected by the COVID-19 pandemic.

Data in the report reveals IFC service providers continued to equip aircraft through 2021 and, while not returning to pre-2019 levels, in-flight connectivity showed strong signs of uptake in the year with 120 commercial airlines offering in-flight connectivity to passengers with a total bandwidth capacity consumption rising to an unprecedented 24 gigabytes per second.

The pandemic acted as a catalyst for a series of service provider mergers and acquisitions, with more expected in the coming years. As a result, providers emerged from a turbulent period of financial restructuring in a favorable position to pursue new contracts, with as many as two dozen signed by the end of 2021 involving the equipping of a combined total of 1,500 aircraft.

Overall, the report anticipates a positive trend up to 2031, thanks to a convergence of rising consumer demand and increasingly greater bandwidth availability. For airlines, the drawn-out resumption of long-haul flights, the return to service of the Boeing 737 Max and the diversification of service providers will all contribute to increased IFC consumption.

Service revenues representing the growth in the post-pandemic world. 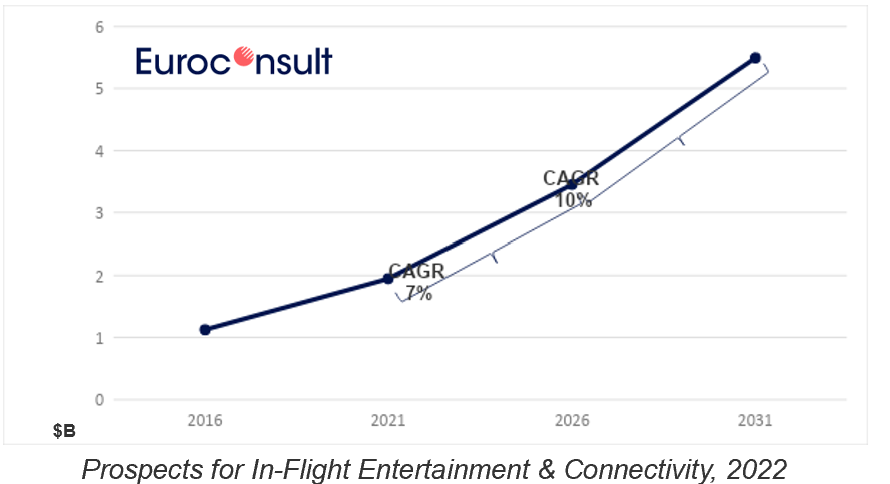 Service providers will, however, have to contend with evolving technologies that are likely to drive down capacity pricing. The adoption of competing satellite constellation architectures, expected to significantly advance post-2025, will lead to an upsurge in bandwidth availability as satellite operators switch to new generation satellites. However, the availability of new capacity, combined with increases in bandwidth demand as the airline industry returns to normalcy, could lead to bandwidth congestions in heavy air traffic regions like the North Atlantic Ocean.

For more key metrics and a detailed analysis of technology, services and contracts, this year’s Euroconsult’s ‘Prospects for In-Flight Entertainment & Connectivity’ report returns to a single scenario forecast up to 2031.

It features a meticulous market analysis grounded in year-long tracking of IFC status for commercial aircraft, as well as a dedicated focus on business aviation benefiting from revised Average Revenue per Aircraft (ARPA) and average cost capacity figures. The report is available now on Euroconsult’s Digital Platform.

The Euroconsult Group is the leading global strategy consulting and market intelligence firm specialized in the space sector and satellite enabled verticals. Privately owned and fully independent, we have over thirty years of experience providing first-class strategic consulting, developing comprehensive market intelligence programs, organizing executive-level annual summits and training programs for the satellite industry. We accompany private companies and government entities in strategic decision making, providing end-to-end consulting services, from project strategy definition to implementation, bringing data-led perspectives on the most critical issues. We help our clients understand their business environment and provide them with the tools they need to make informed decisions and develop their business. The Euroconsult Group is trusted by 600 clients in over 50 countries and is headquartered in France, with offices in the U.S., Canada, Japan, Singapore, and Australia.

Op-Ed: The Future of Airports – a new model from an old tradition