Honeywell has unveiled an all-new aircraft cockpit system, the first in the industry built with an always-on, cloud-connected experience that improves flight efficiency, operations, safety and comfort.

Honeywell Anthem is powered by a flexible software platform that can be customized for virtually every type of aircraft and flying vehicle, including large passenger and cargo planes, business jets, helicopters, general aviation aircraft, and the rapidly emerging class of advanced air-mobility (AAM) vehicles.

“Honeywell is not just launching a new flight deck today — we are changing the way pilots operate aircraft and creating a more intuitive experience than ever,” said Mike Madsen, president and CEO, Honeywell Aerospace. “In the same way we moved from flip phones to smartphones, Honeywell Anthem will transform the pilot experience with customizable controls operated quickly and easily with a few swipes of the finger.”

How connectivity changes the game

Honeywell Anthem is designed to solve two problems facing the aviation industry. First, it creates ways for increasingly complex aircraft to function with more autonomy, relieving stress on pilots and promoting safety and efficiency. Second, it enables the disjointed systems that support an aircraft to work together more seamlessly to deliver critical information to pilots.

Honeywell Anthem supports growing levels of aircraft autonomy, leading to complete autonomous capabilities in the future as regulations allow. Enabling increasing levels of autonomy — whether it’s automating manual tasks for single-pilot operation or automating more complex processes to reduce workload across all pilots, maintainers and other service providers in a large fleet — depends heavily on improving connectivity across aircraft systems. 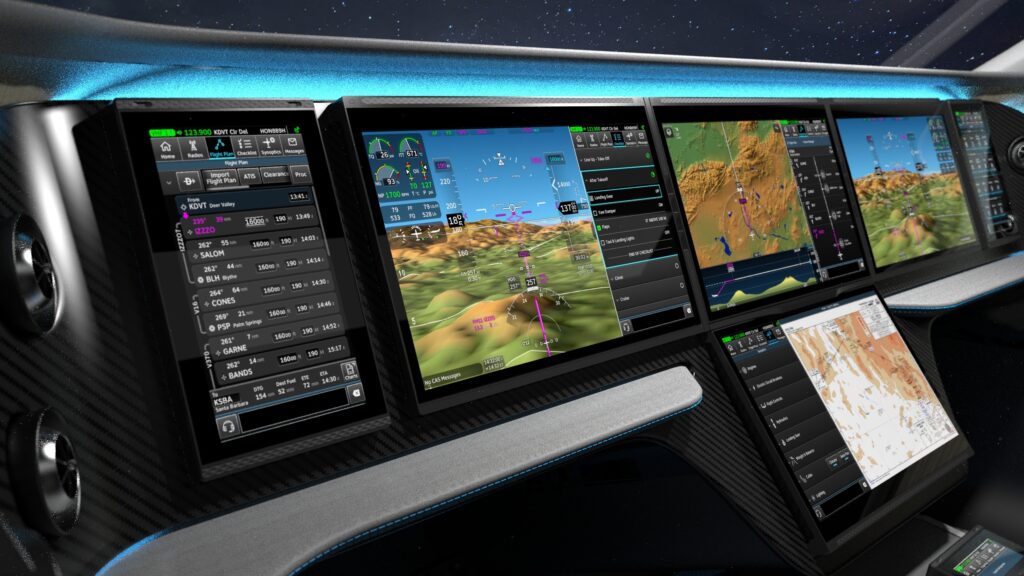 Historically, mechanics and pilots had to be on board aircraft with wired connections to transfer critical data like maintenance status and flight plans. Honeywell Anthem allows for this data transfer without needing to be physically near the aircraft.

Additionally, individual support systems (fuel, maintenance, catering, etc.) have also been disjointed, forcing pilots to interface with multiple third-party apps, websites and businesses both pre-flight and post-flight. The pilot used to be required to integrate all this critical incoming information and then provide notifications to numerous support personnel prior to, during and after completing a flight.

As the world’s first always-on, cloud-connected avionics, Honeywell Anthem generates and transfers data from ground-based servers so those involved in a flight’s operations have the information they always need. An aircraft doesn’t even need to be powered on for pilots and maintainers to see the information they might need prior to launching a flight.

“Everyone who touches a flight is able to get information that matters to them when they need it,” said Vipul Gupta, vice president and general manager, Avionics, Honeywell Aerospace. “The aircraft becomes accessible via the cloud computing infrastructure, and things like maintenance data, flight plans and overall aircraft status are stored automatically by the avionics or via ground-based applications used by support personnel. This means data is accessible by any authorized user from anywhere.”

Honeywell Anthem’s connectivity capabilities dramatically reduce pilots’ preflight preparation time, including wasted time in the cockpit, by up to 45-minutes per flight. Honeywell Anthem seamlessly integrates with popular electronic flight bag planning applications to let pilots create, store and retrieve flight plans from anywhere. After pilots load the flight plan remotely, it will be ready and waiting when they arrive at the aircraft. This remote flight plan loading is an industry first, enabled by the connectivity built into Honeywell Anthem. Prior to engine start, flight deck setups are also faster because many routine tasks can be accomplished off board before getting to the aircraft.

Beyond the benefits experienced by pilots and operators, service providers from maintenance personnel to caterers will benefit from Honeywell Anthem. They will have a higher level of visibility into real-time flight details than before. For example, prior to traveling to the airport, pilots can set up automatic notifications managed via the new Mission Manager function so that fueling teams, ground transportation and caterers are aware of the mission plan, even if the plan has to change due to unexpected weather. If the pilots are connected to Honeywell Anthem, they’re connected to everything they need.

As intuitive as a smartphone, and packed with apps

In addition to its cloud-connected avionics, Honeywell Anthem’s smartphone-like, easy-to-use interface is more intuitive than any other flight deck. It provides pilots and operations personnel with several capabilities that dramatically improve access to data, improving operational efficiency and safety.

For example, pilots or operators — whether in the cockpit or on their device at home — can customize the layout of digital displays within the cockpit to their preference. With a few finger swipes, pilots can reconfigure a screen or cluster of information just like they would on their personal smart device. Additionally, unlike traditional interfaces based on limited text-entry or basic graphical menus, Honeywell Anthem uses visualization and modern graphical and gesture-based methods, making the flight deck much easier to use and more fun to fly. 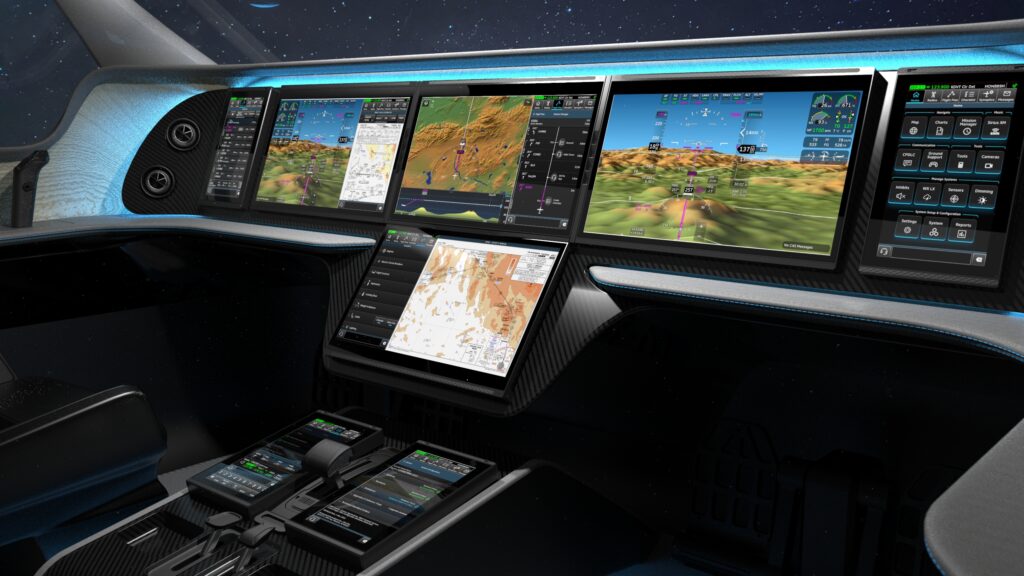 Additionally, Honeywell Anthem can significantly reduce the potential for ground collisions, runway incursions and runway excursions by 50% with several new features that provide pilots with unprecedented situational awareness. Those features include the 3D Runway Overrun Alerting and Awareness System (ROASS) and 3D Airport Moving Maps. Honeywell Anthem also provides the cleanest, most functional symbology available today, a track-based Synthetic Vision System, plus the industry’s best Integrated Navigation Map and Vertical Situation Display. Honeywell Anthem is designed to fit a wide variety of aircraft both now and in the future, making advanced features that traditionally require a large amount of computing power accessible to smaller business and general aviation aircraft for the first time.

Another of Honeywell Anthem’s unique features is a web browser that allows third-party applications and websites to run in the Honeywell Anthem cockpit. For example, pilots, via a third-party app, can display live weather cameras from the airport they are currently traveling to. Right next to that, they could display live radar imagery above the airport. Having more of this type of information at pilots’ fingertips helps them make better decisions more often.

Honeywell Anthem also integrates with Honeywell Forge, a software platform that includes in-air and on-ground solutions for flight operations, flight efficiency, and connected maintenance in a single user interface. This integration enables operators to make proactive decisions about in-flight routing that save fuel and help avoid flight interruptions because of maintenance. For example, thanks to the always-on cloud connectivity Honeywell Anthem provides throughout flight, maintenance crews can be alerted hours ahead of landing and have necessary parts and personnel on hand to quickly perform any work on the aircraft and keep it in service for the next flight. As a result, Honeywell Forge can help operators and OEMs reduce labor costs associated with managing their fleets by 10% to 15%.

“When you combine unprecedented connectivity and new features with our brand new, intuitive user interface that can be tailored to look and feel exactly how a pilot wants, you’ve got a truly game-changing system,” Gupta said. “Honeywell Anthem is going to bring us closer to our shared industry goals of better pilot experiences and more autonomous flight.”

In addition to use on general aviation aircraft, rotorcraft and business jets, Honeywell Anthem will be available to future aircraft platforms in the emerging AAM market segment. Honeywell Anthem has already been selected by Vertical Aerospace and Lilium for their vertical takeoff and landing, all-electric aircraft, the VA-X4 and 7-Seater Lilium Jet, respectively.

Vertical’s VA-X4 is a piloted, zero emissions electric battery-powered aircraft. The aircraft takes off vertically, travels at a top speed of 200 miles per hour while carrying up to four passengers and is 100 times quieter than a helicopter.

The Lilium Jet is the world’s first electric jet that takes off and lands vertically. It seats six passengers and has one operator, with a cruise speed of 175 miles per hour and a nonstop range of approximately 155 miles. Both innovative aircraft will take flight in the coming years with Honeywell Anthem onboard.

“One of the many great things about Honeywell Anthem is its ability to fit any aircraft — both literally and figuratively. It’s scalable and customizable, meaning we can bring this into almost anything that’s currently flying or will fly in the future. That’s great news particularly for our UAM customers,” said Stephane Fymat, vice president and general manager, Urban Air Mobility and Unmanned Aerial Systems, Honeywell Aerospace. “The VA-X4 and 7-Seater Lilium Jet will revolutionize urban and regional air travel, and those will be some of the first platforms in the world to use Honeywell Anthem, which will, in turn, completely change how we pilot aircraft.”

To learn more about how Honeywell Anthem is transforming the way we think about flight, visit aerospace.honeywell.com.

All images credited to Honeywell