During the International Air Transport Association’s Annual General Meeting, KLM and the Delft University of Technology (TU Delft) revealed a design for an alternative “Flying-V” aircraft, which would be more fuel efficient than today’s airliners. Yesterday, as part of KLM’s celebration of 100 years of history, both the airline and TU Delft showed off a 1:1 mock-up of part of the interior for the Flying-V.

The model will also be displayed for the public during Dutch Design Week between 19 October and 27 October. For the uninitiated, TU Delft presents a Q&A about the program below.

It’s a highly energy efficient aircraft design for long distance flights. It’s called the Flying-V because its passenger cabin, cargo hold and fuel tanks are integrated in the wings, creating a spectacular V-shape. The design is expected to use 20% less fuel than today’s most energy efficient aircraft (the Airbus A350) due to its aerodynamic shape. However, with more fuel efficient engines than today, the fuel consumption can be lower and using hydrogen propulsion – which might be possible – gives no CO2 emissions at all.

Who came up with the idea?

Justus Benad, at the time a student of TU Berlin doing an internship at Airbus Hamburg, came up with the idea. He’s currently working towards his PhD at TU Berlin on another subject. He’s very interested in our project and will participate in our talks about the research roadmap. 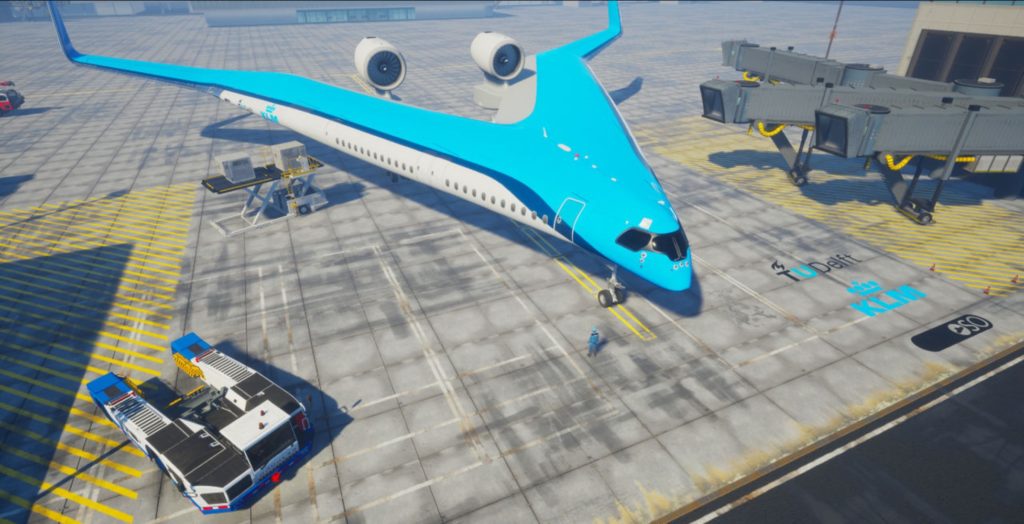 The Flying-V presents all sorts of #PaxEx possibilities. Image: KLM

What’s the role of TU Delft?

Dr. Roelof Vos, an Assistant Professor of Flight Performance and Propulsion at TU Delft and Dr. Peter Vink, who chairs the university’s Design Engineering department, thought the design was very promising. With their multidisciplinary team including aerospace engineers and industrial design experts, they are working on further development of the design of the interior, which was shown this week to KLM. They are also working on the design of a flying scale model, a demonstrator, which is scheduled to be flying by the end of October 2019.

What’s the role of KLM?

KLM and TU Delft work together on a range of research and education projects, such as the corporate biofuels programme. KLM is financially supporting the development of a flying demonstrator, via the Delft University Fund.

How is Airbus involved?

The Flying-V is one of the research collaboration projects between Airbus and TU Delft. Currently, TU Delft’s aerospace engineering students work on the design during their internships and thesis projects at Airbus. The Flying-V is one of the options explored for future aircraft, and is not being developed to replace any of the current Airbus aircraft. The A350 is used for comparison only.

Airbus has since indicated it is very interested in the project. The airframer will take part in the talks about the future research roadmap and is supporting us with the flight tests.

Why is the Flying-V promising for sustainable aviation?

Initial wind-tunnel tests at TU Delft have shown that the Flying-V’s improved aerodynamic shape and lower weight should lead to a 20% reduction in fuel requirements as compared to the Airbus A350, today’s most advanced aircraft.

Aircraft have become a lot more energy efficient over the decades, but only as a result of improved engines. To create a step-change in energy efficiency, the shape of aircraft will need to change too. The Flying-V design can be that game-changer because of its improved aerodynamic shape and its reduced weight. It is smaller than the A350 and has less inflow surface area compared to the available amount of volume. The result is less resistance, which means that the Flying-V needs less fuel for the same distance.

In addition: the Flying-V can be equipped with innovative propulsion systems or fuels, such as hydrogen. In that way it will become even more sustainable.

What fuel is used for the Flying-V?

It is designed now to fly on kerosene, but can easily be adapted to use more sustainable and innovative propulsion systems in the future.

Will the Flying-V ever be 100% electric?

The Flying-V is designed for long-distance flights. Due to the weight of current batteries it seems more likely at the moment that long-range aircraft will fly on hybrid-electric systems or alternative energy carriers such as hydrogen. For middle distance and short distance flights, 100% electric flying may be viable in the future.

The Flying-V will consist of an oval shaped pressure cabin. Industrial Design engineers at TU Delft are researching how to improve the interior and the passenger experience, for example by creating more options for lying down, varying the posture while seated, or collecting food from a buffet. 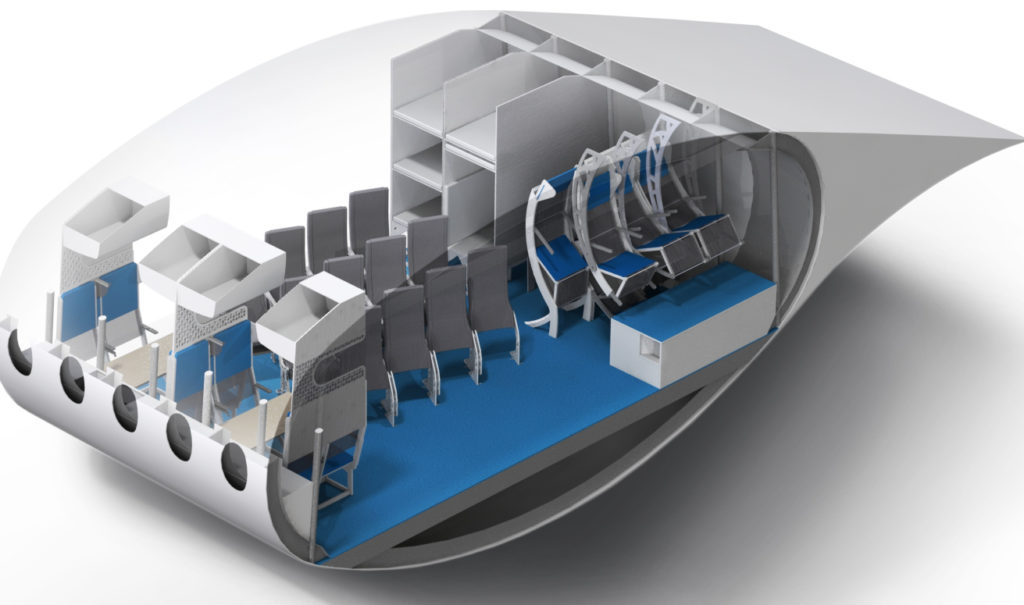 Will the Flying-V fit in regular airports?

Although the plane is not as long as the A350, it does have the same wingspan. This allows the Flying-V to use the present infrastructure at airports, such as gates and runways, without problems. It also fits in the same hangar as the A350.

What’s the size of a Flying-V?

It has the same wing span of an Airbus A350, but it’s shorter from nose to tail. Its dimensions are:

How many passengers and how much cargo will it fit?

The Flying-V carries the same number of passengers, 314 in the standard configuration; and the same amount of cargo, 160m3, .as the A350.

When can we fly in a Flying-V?

If and when the aircraft will be taken into production is a decision left up to builders such as Airbus. The development, certification and market launch of new aircraft usually takes up to 20 years. We hope to see it up in the sky around 2040.

Why is it necessary to build a flying scale model?

Our biggest challenge is to make sure the Flying-V can remain stable and reliable while being flown at low speeds – during takeoff and landing. It’s precisely to test and improve this that a flying scale model is necessary. We are thrilled that KLM is giving us the opportunity to build it.

When are flights of the scale model expected to take place?

Flight tests are expected to take place later in the year. These tests will take place with the support of Airbus on a military airport. Only a very small crew will be present. This is all for safety reasons. We will, however, record the tests and release the footage afterwards.

Why was it difficult to build the scale model?

The Flying-V is a radically new aircraft design. It will behave differently in the air. When building a scale model you already have to take this into account. The model – a big drone of 2,5 m long and wide – needs all the electronics and systems to operate it, and to measure the flight parametres which we need for research and optimisation of the model. This was all done by a small team of engineers, technicians and master students. For them it was also an incredible learning experience.

Did anything go wrong?

They’re a young team, working under incredible pressure on an experimental aircraft design. Of course there are things that do not go as planned, but we’re a university. It’s fine, because then you learn. It’s an incredible learning  curve for all of us. But: the scale model is there and we hope to be testing it later on in the year – weather permitting.

Passengers will sit in the wings and from a safety standpoint the angle of the seats should not be more than 18 degrees from the flying direction. This is achieved by staggered seats in the middle of the airplane. Additionally, the interior has a complete new form. It is oval in cross-section and offers new possibilities and at the same time new challenges. First ideas for the interior are being made, but need to be developed further. 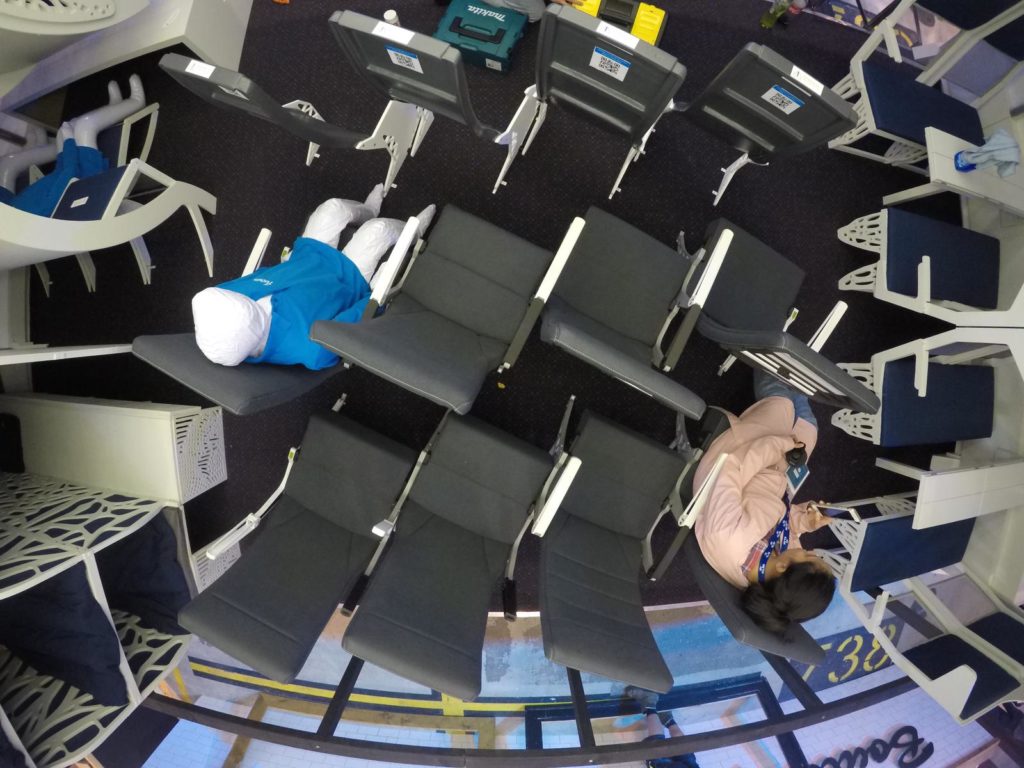 The Flying-V can be fitted with more experimental cabin designs. Professor Peter Vink and industrial design engineer Thomas Rotte at the faculty of IDE have made a more experimental design combining lightweight design technology and their research into passenger experience. In the design that features four different types of seating (group seating, individual seats, lounge chairs and collapsible beds) they reduce weight, improve passenger comfort and accommodate the same number of passengers as  an Airbus A350: approximately 314. 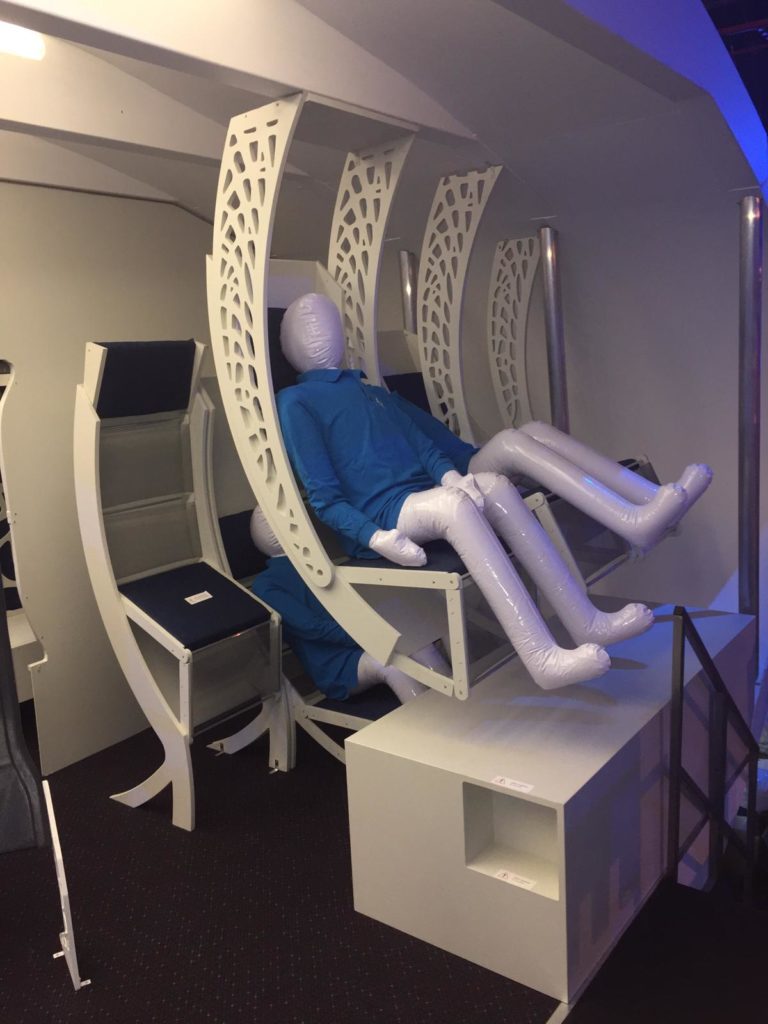 The cabin interior is designed to be as lightweight as possible, contributing to the sustainability goals of the aircraft, but is also meant to improve the flying experience for passengers while still allowing the same number of passengers in the cabin.

What is special about the experimental design?

In order to increase the passenger experience the experimental interior design features several different seating types within one interior. Each seating type has been targeted to a specific travelling style, as identified by our research. The exact number of different types, the ratio between these, as well as the effect on booking, boarding and onboard logistics are yet to be investigated. 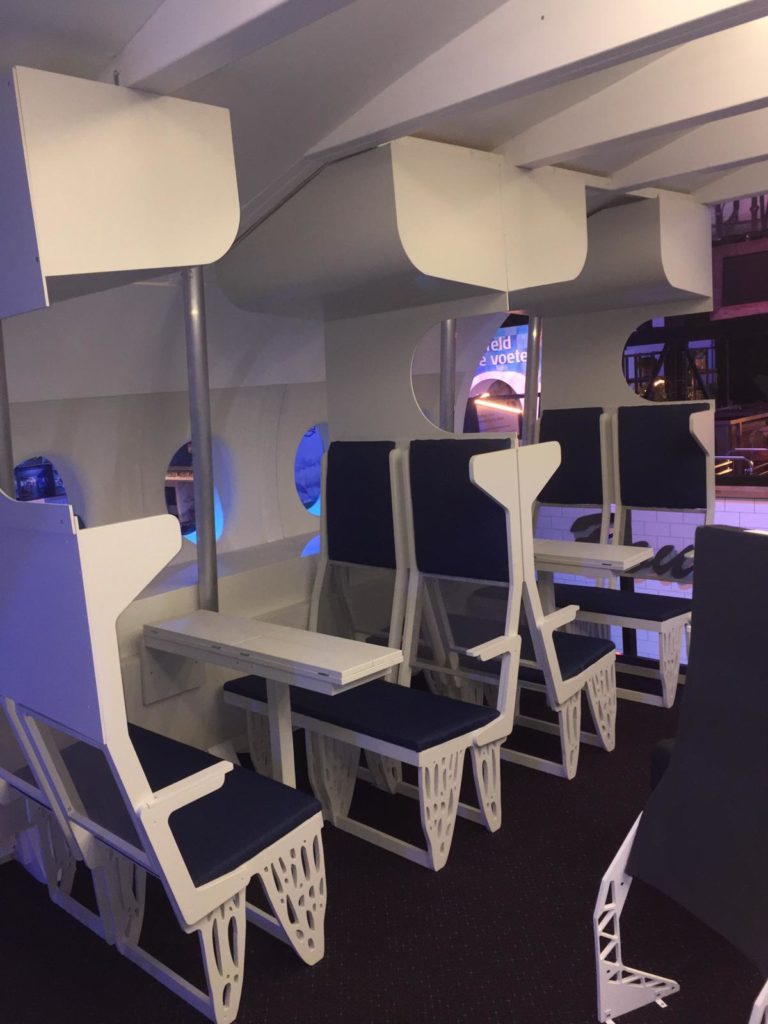 Is this experimental design only applicable to the Flying-V?

The Flying-V has a flat oval cross section, and an inner push-pull construction partly protruding into the cabin. The official cabin width is defined within this construction, leaving some additional space free to be used outside of the defined cabin width. The experimental interior is designed specifically for the Flying-V, utilizing the additional space in several ways in order to maximize the passenger capacity. 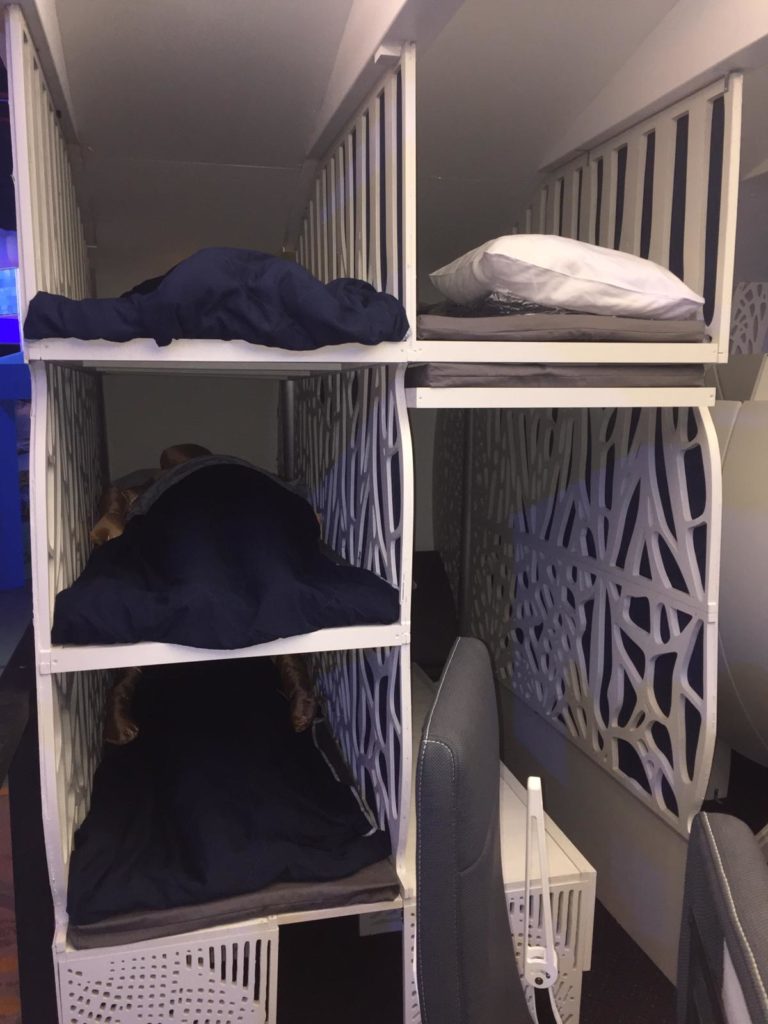 What is the impact on the skewed seats?

This should be possible as business class seats on current aircraft have the same orientation. However, airbags are used in these situations. Ideally, the seats should be in the direction of flying to reduce airbag use.

What about evacuation? Has this been modeled?

Passenger evacuation has not yet been modeled at TU Delft. The number of exits corresponds with guidelines: 4 pairs of Type A exits would theoretically be enough for 440 passengers. However, further study is needed to show that this indeed complies with the 90-second rule.

Will the experimental cabin design contribute towards the sustainability goals of the Flying-V?

Yes, we work with lightweight materials and use generative design to reduce weight as well.

What other sustainable aviation projects is TU Delft working on?

What are the climate effects of aviation?

Global aviation is responsible for about 2.5% of total CO2 emissions. This percentage is set to increase rapidly as the number of kilometres passengers travel each year is growing at about 4.5 to 5% per year. We’re flying increasingly often and increasingly far. This was why, in October 2018, the Dutch aviation sector presented an action plan to Minister  Cora van Nieuwenhuizen of Infrastructure and Water Management on making air travel more sustainable.

Twenty transport organisations and knowledge institutions joined forces on the ‘Smart and Sustainable’ plan aimed at speeding up existing developments for making aviation more sustainable. The aim is to decrease Dutch aviation’s CO2 emissions by 35% by the end of 2030.

All photos credited to TU Delft.