Iridium Certus is a unique platform designed for the development of specialty applications and is the world’s only truly global broadband service, offering on-the-move internet and high-quality voice access.

This also includes safety-of-life services, where Iridium Certus is uniquely suited for the critical communications needs of teams operating beyond the reach of cellular coverage, including first responders and search and rescue organizations.

This announcement marks the end of an extensive global testing phase, including beta trials with live customers; the initial service is targeted at maritime and terrestrial applications, with Iridium Certus aviation solutions expected later in 2019, once certified.

Iridium Certus enables a unique and high-value suite of mobility applications and true comms-on-the-move capabilities with the known robustness and reliability that come with being a cutting-edge L-band user network. This includes keeping lone workers, crews at sea or operational aircraft safely connected and maintaining consistent communication, regardless of location. Iridium Certus can also support applications that serve remotely deployed IoT devices or mobile platforms like UAVs for vital command and control links for the long haul delivery of critical supplies like vaccines and medicine.

“The debut of Iridium Certus is the start of a new chapter in the Iridium story, one that is set to catapult us and our partners forward.  At its core, Iridium Certus is an innovation engine for the future. It will enable us to provide broadband connections to teams, vehicles and the important IoT “things” that are in the 80-plus percent of the world that lacks cellular coverage,” said Iridium CEO Matt Desch. “Adoption of this new service by our partners has already begun, and it has been eagerly anticipated by every target industry. The launch of this service is a huge achievement, and it is already disrupting the status-quo through our smaller, faster, lighter and more cost-effective terminals and service.”

“Iridium Certus is delivering real-time connections everywhere our vessels go. As a result, shipboard communications, vessel performance systems and the crew themselves are never out of contact. We are now able to upgrade existing broadband terminals to Iridium Certus to ensure we are getting the highest throughput at the best cost on the newest global network,” says  Holger Börchers of Briese Schiffahrts GmbH & Co. KG, Leer/Germany. “Iridium Certus is a game-changer for us.”

Aside from operating on the only truly global satellite constellation, Iridium Certus terminals are smaller in form factor, will offer higher speeds and are more cost-effective than competitive L-band broadband offerings. Terminals are being built by Cobham (maritime), Thales (maritime, aviation and land-mobile), Collins Aerospace (aviation), L3 (aviation), Gogo (aviation) and Satcom Direct (aviation). And to date, 36 world-class service providers are authorized by Iridium to provide the service around the world.

“Rocky Mountaineer is a luxury tourist train that travels through some very remote parts of the Pacific Northwest and Western Canada. Iridium Certus has been everything we could have hoped for, in terms of keeping us in consistent communication, despite the challenging operating environment,” said Chris Sepp, Senior Director, Information Technology at Rocky Mountaineer. “This is a major upgrade to our existing capabilities with positive effects for safety, tracking and efficiency of our system. We’re excited to continue adding the service to our trains.” 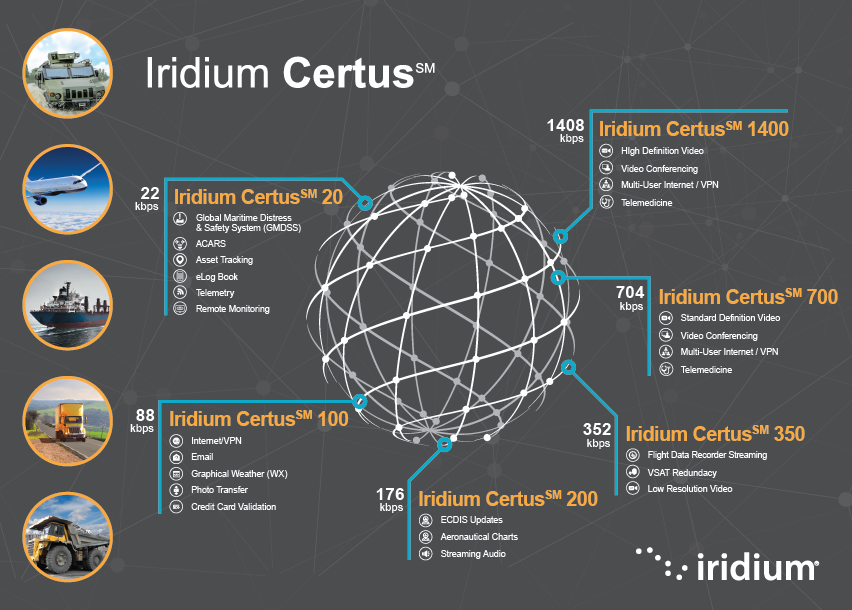 Iridium Certus addresses the needs of satellite communications users with a robust suite of solutions for maritime, land mobile, aviation, government and IoT applications. Now that the service is available, mariners will, for the first time, have a more competitive range of choices when evaluating connectivity solutions for vessels of any size, supporting the digitalization of shipping and the autonomous vessel movement.

Land-mobile users will be able to connect vehicles and assets “on-the-move” anywhere on the planet, with customizable hardware and solutions that can switch from cellular to satellite connectivity as needed to help manage costs. Upon terminal availability later in 2019, aviation users will gain access to Iridium Certus solutions that support a range of capabilities for aircraft, including business jet cabin connectivity for mobile office functions.  Future flight deck applications will help advance efforts toward adopting satcom as a primary means of aircraft communications.

For government users, Iridium Certus provides a secure solution that supports the mission-critical requirements of the warfighter, including truly mobile hardware that is resilient and rugged enough to withstand high-risk combat zones and inclement weather events. For IoT applications, Iridium Certus will in the future deliver Internet Protocol (IP) data applications over smaller, portable and more cost-effective devices to vertical markets like industrial IoT, forestry, utilities, supervisory control and data acquisition (SCADA), transportation and construction, to name a few.

In the coming year, Iridium plans to introduce an even more versatile transceiver that can scale down terminals to smaller, lighter and more portable uses on vehicles, drones, buoys, endangered animals and more. These transceivers will then become part of long-lasting battery-powered devices ideal for IoT applications in remote environments.

Iridium is debuting the service, which will feature a variety of speed classes, with the Iridium Certus 350 (352/352 Kbps) offering, which supports capabilities like internet and high-quality voice services to compact terminals built specifically for maritime, aviation and terrestrial/vehicle applications. Terminals will be upgradable to the next speed class, Iridium Certus 700 (352/704 Kbps), with a firmware update once available. Initial activations of the service occurred in December of 2018 with excellent system performance.

Iridium Certus is powered by the low earth orbit Iridium satellite network, comprised of 66 crosslinked satellites that create a web of coverage around the entire planet. Unlike other satellite systems, Iridium’s crosslinked architecture enables real-time transit of data to and from any location on the globe without the need for abundant ground stations and allows it to maintain consistent, high quality coverage, including over the oceans and polar regions.

Iridium is the only mobile voice and data satellite communications network that spans the entire globe. Iridium enables connections between people, organizations and assets to and from anywhere, in real time. Together with its ecosystem of partner companies, Iridium delivers an innovative and rich portfolio of reliable solutions for markets that require truly global communications. The company recently completed the last scheduled launch of its next-generation satellite network – Iridium NEXT – and plans to complete the upgrade in the coming weeks. Iridium Communications Inc. is headquartered in McLean, Va., U.S.A., and its common stock trades on the NASDAQ Global Select Market under the ticker symbol IRDM.

Statements in this press release that are not purely historical facts may constitute forward-looking statements as defined in the Private Securities Litigation Reform Act of 1995. The Company has based these statements on its current expectations and the information currently available to us. Forward-looking statements in this press release include statements regarding the timing of introduction, capabilities and benefits of new products and services enabled by the Iridium NEXT constellation, including Iridium Certus. Forward-looking statements can be identified by the words “anticipates,” “may,” “can,” “believes,” “expects,” “projects,” “intends,” “likely,” “will,” “to be” and other expressions that are predictions or indicate future events, trends or prospects. These forward-looking statements involve known and unknown risks, uncertainties and other factors that may cause the actual results, performance or achievements of Iridium to differ materially from any future results, performance or achievements expressed or implied by such forward-looking statements. These risks and uncertainties include, but are not limited to, uncertainties regarding the development and functionality of Iridium NEXT and related services, and the company’s ability to maintain the health, capacity and content of its satellite constellation, as well as general industry and economic conditions, and competitive, legal, governmental and technological factors. Other factors that could cause actual results to differ materially from those indicated by the forward-looking statements include those factors listed under the caption “Risk Factors” in the Company’s Form 10-K for the year ended December 31, 2017, filed with the Securities and Exchange Commission (the “SEC”) on February 22, 2018, and in the Company’s Form 10-Q for the quarter ended September 30, 2018, filed with the SEC on October 25, 2018, as well as other filings Iridium makes with the SEC from time to time. There is no assurance that Iridium’s expectations will be realized. If one or more of these risks or uncertainties materialize, or if Iridium’s underlying assumptions prove incorrect, actual results may vary materially from those expected, estimated or projected. Iridium’s forward-looking statements speak only as of the date of this press release, and Iridium undertakes no obligation to update forward-looking statements.