When Carter Emmart, director of astrovisualization at the American Museum of Natural History, first saw photographer Jon Carmichael’s stunning photo of the Great American Eclipse under the moon’s shadow, he was bowled over.

“This is by far one of the best eclipse photos I have ever seen. In Jon’s photograph, one gets the linkage to space, with greater landscape detail than we get from Earth’s orbit. His image is a ladder to space,” remarked Emmart.

In advance of the 21 August 2017 eclipse, New York-based Carmichael, like other savvy #AvGeeks, mapped out commercial flight paths around the US and compared them to the moon’s path of totality. After determining that Southwest flight 1368 from Portland, Oregon to St. Louis could offer his best chance to capture the once-in-a-lifetime moment, he bought a ticket.

There was just one problem. Business Select on the flight was sold out and Carmichael ended up in boarding group C. His biggest fear was that he wouldn’t score an all-important window seat.

With cash in hand for bribes, and his Canon camera in tow, Carmichael threw himself on the mercy of the crew at the gate in hopes of obtaining a better seat. There he met other Southwest employees, who were also readying to take the flight, as well as the pilots. He showed them some of his astronomy photos, and explained how he is a sport pilot who had been “visualizing this for many years” and “wondered if you could see the moon shadow”.

Southwest, itself, had “crunched the data and found flights most likely to intersect the umbra, assuming normal operational factors”, the carrier explained to WIRED last year, noting that aircraft need to be flying along the path of the shadow, rather than simply through it in any random direction, in order to have worthwhile exposure to the event.

Flight 1368 was delayed by 25 minutes on that day. But when it took off, Carmichael was sitting in seat 1A, thanks to the pilots. The Captain had even cleaned his window to facilitate the photoshoot.

“All the passengers were getting excited,” recalls Carmichael for Runway Girl Network. And indeed, a Southwest employee, who blogged about the experience, said everyone aboard immediately availed themselves of the free inflight television (supported by Global Eagle’s antenna and wifi hardware) to watch CBS News or NBC News, as both were broadcasting the eclipse live.

When totality started, the Captain began S-turns to give everyone a good view. “Air traffic controllers across the country were probably getting a few special requests that day,” notes a Southwest spokeswoman. The Southwest pilot made some turns specifically so that the entire flight could better see the eclipse, “but really so that Jon could get the shots he wanted”.

Carmichael, meanwhile, was focused on obtaining the perfect snap. The river you see in his photo is the Snake River on the Oregon-Idaho border. “I love the symbolism there – that astronomy is not biased to borders,” he says.

On landing, Carmichael got to work, spending hundreds of hours on the image. The completed piece, a 74” x 115” photo mosaic, is being unveiled today at Twitter’s office in New York.

For Carmichael, whose work was discovered in 2015 by musician and prominent photography collector Sir Elton John and who collaborates with many leading brands including Twitter, the whole experience felt like fate. The weather “couldn’t have been better”, and the pilot angled the aircraft at the right moment for him to capture the beautiful diamond ring effect of the eclipse.

Adds Southwest: “We didn’t know that Jon would get this amazing photo. Our employees love going above and beyond to make a memorable experience.”

In six years, there will be another eclipse, from Texas to Maine. “Everyone asks if I will be on a flight,” says Carmichael. But this time he may take a more pedestrian approach., quite literally “I kind of want to be on the ground in nature and outdoors, and without a camera. I was so focused on getting the shot, I only saw eclipse totality for two seconds.”

In the meantime, Carmichael wants to use this image to educate people, and let it serve as a symbol “that this is what nature does for you when you look up, pay attention and have a cosmic perspective. It’s a wonderful thing.” 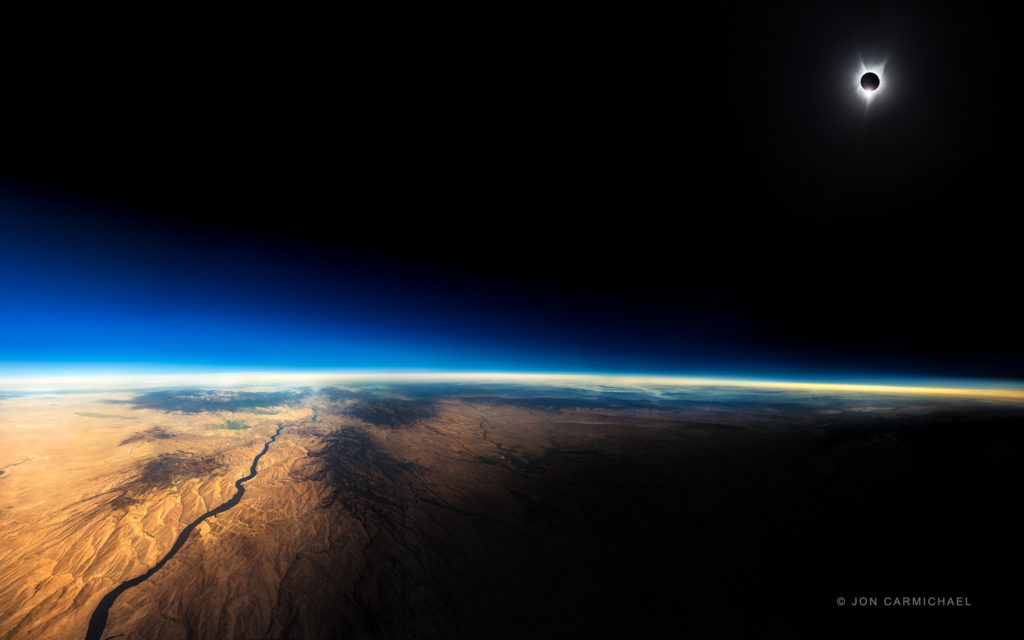 Great American Eclipse over the Oregon and Idaho border at 39,000 feet on Southwest Airlines flight. All rights reserved. Do not copy or sell print without permission from image creator Jon Carmichael.