You could say that W. L. Gore & Associates is a bit of an unsung hero in aviation. Operating largely behind the scenes – or rather, above aircraft ceilings and under the floors – Gore has carved out an enviable position in the inflight entertainment and connectivity (IFEC) industry as a leading provider of cables and materials. But there can be no resting on its laurels, as airlines and passengers expect faster and faster data transfers from these unseen IFEC backbones.

“Airlines are looking for the latest and greatest [in] things that you report on, so they’re looking for 4K displays and new USB protocols coming in. And as these new protocols come in, it’s very straightforward from a consumer [standpoint] to see 4K TV, but to actually enable the cabling which can pass all the requirements which can fly on an aircraft and have it developed and working very quickly is really where Gore is focusing. We are looking at the leading edge of all these high-speed protocols,” says Gore global product manager – civil air cabling and aircraft connectivity products, Adrian Milne.

With a portfolio of high data rate cables and leaky feeder antennas, Newark, Delaware-headquartered Gore is up for the task. Indeed, the firm manufactures the leaky feeder antennas that provide connectivity to a variety of wireless systems, including picocells for inflight GSM solutions on offer from Panasonic Avionics subsidiary AeroMobile and Sitaonair. Installed down the length of aircraft, leaky feeders also improve signal propagation while reducing the amount of hardware required to support inflight connectivity. The work is not without its challenges.

“From a technology perspective, the challenge you have when you are putting a picocell – i.e. a cellular enabled network – into an aircraft is that you have the frequency that your cellphone wants to work on, but you also have all these other frequencies out there in the world that you really don’t want inside the cabin. So what these systems are doing is they are actually blocking all the other cellular frequencies that are in the cabin and allowing just the frequency that the cell phone is going to work on,” says Milne.

“Now to make that work you can either have lots of little antennas for all these different spot frequencies in the aircraft; so lots of cables, lots of antennas, lots of cost. Or you can use our product, this leaky feeder antenna that works across all the frequencies simultaneously. So rather than having lots of individual, multiple ones, you can have one solid broadband system that fits this signal all the way through the aircraft from the front to the back.”

Gore is the market leader on this front. “I think for the last probably five, six, seven years, any picocell or cellular systems that are fitted on large aircraft will have a Gore antenna on them; we have the market on that,” says Milne. “[These are] systems that work in the background; people know their phones are working really well and the systems are working well, but they know the name of probably SITA and OnAir [now a combined entity] or Panasonic or all these other companies that are enabling the systems. But Gore has a lot of patented technology that we’ve developed in-house that has enabled these things to work.” 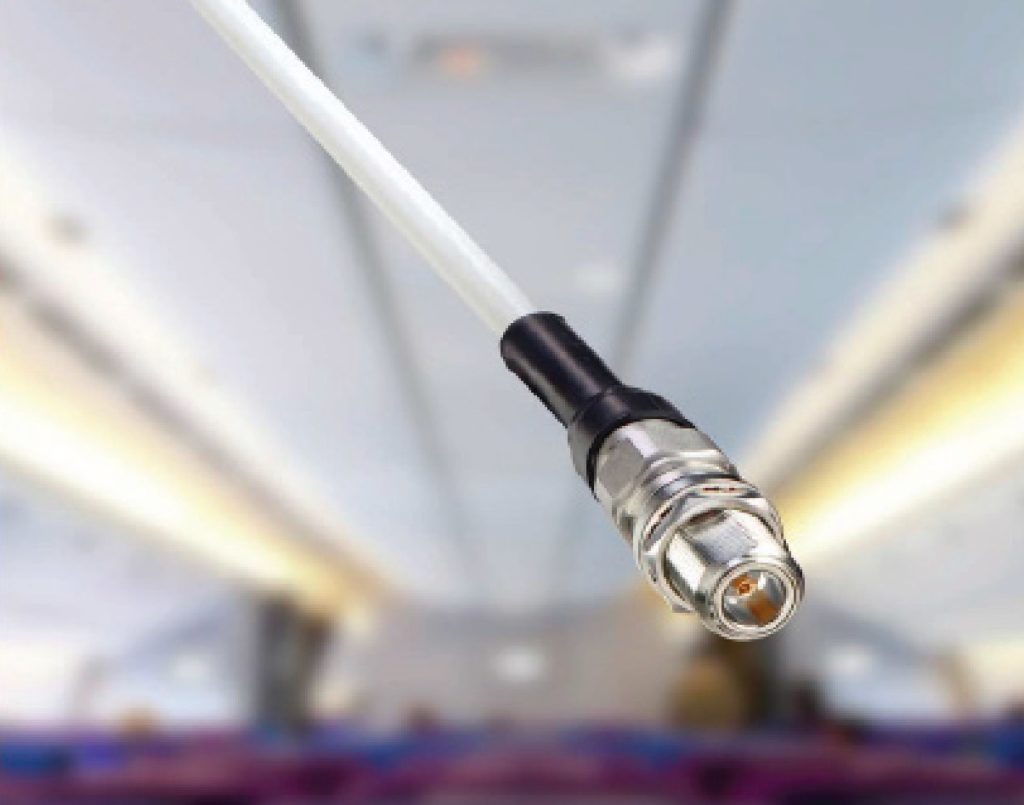 “So for a consumer, a passenger, that means that they are getting the best data speed they can get. They are getting an uninterrupted signal. And from an aircraft, or a user point of view, they are having as much operational time as they can have with their aircraft,” says Milne.

“Aircraft that they are flying around with IFE systems that aren’t operating or have been down is obviously a cost and it’s a customer experience issue. So rather than potentially looking at the cheapest option or you know the cheapest thing that can be fitted, we are really taking a lot of time and attention to look at the cabling systems that connect all these electronic systems together and make them as reliable as possible. So that it’s kind of this – if it’s not broken, then people almost don’t think about it. When it does break it’s a big issue. So we are trying to make all this stuff happen in the background so that the passenger experience continues,” says Milne.

It is “not the case” that seatback IFE is going to die in the near-term. “Because the inflight entertainment is so popular today. As a passenger, it is very difficult to see what will be the timing in the future. [But] I don’t think it will. Not in the next five years. I can tell you, when we have some IFE system not working on the aircraft because [of a] technical issue, [it’s] very difficult to mention the situation to the passengers [because they’re devastated.] So we spend a lot of money on our product to renew the cabins, not only the seats but the also the IFE.”

Gore’s ample experience in fitting cable systems into military aircraft “where failure really is not an option” has aided its work in the civil sector, says Milne. The company says its products have been instrumental in the success of the Phoenix Mars Lander, the International Space Station, and hundreds of satellite and aerospace applications. And Gore fibers “have been woven into the outer layer of astronauts’ space suits since the first space shuttle mission”.

“The systems need to work; they can’t go down,” says Milne. “And we’ve transferred that technology across [to the civil sector], and our knowledge of materials and material science, we’ve transferred across into the civil aircraft world and we’re improving the ops time on new systems compared with some of the things, I think, have been learned in industry in the past with some of the networks.”

Do airlines approach Gore directly, or liaise through its many partners in industry? “We try to talk to everybody and what we are finding is more and more airlines are actually really interested in new technology. So they obviously work with their suppliers about what’s available, but we are finding a lot of the engineers from the companies are wanting to know what’s out there. What the potentials are. What can be done. I think that helps them leverage innovation with their own suppliers.”

In terms of the latest innovations in Gore’s own portfolio, the firm has been working on a new fiber optic product though there are challenges with putting glass in an aircraft.

“Almost every [inflight entertainment] system has a fiber link of some kind. Many of the new wifi systems are actually using fiber to connect the boxes together. [It’s] higher speed, lighter weight. You can do many different things. But inherently you have a piece of glass and you have to protect that,” says Milne. “So we don’t provide the glass; we will use whichever glass is in the industry and we will package and protect that glass in a certain way that it fits the connector options that are there, but we are also making sure that the product can go from the manufacturing bench onto the aircraft with as low a failure rate as possible and will have a long service life. So again, we are using a lot of new engineered materials that we work with to, in very small size, protect that fiber mentioned.”

Weight is always a big issue for airlines. “Airlines are asking for lighter-weight solutions. And abrasion resistance. We have many cables that are running within seats and also within arms. So when you are sitting in an aircraft either in business class or in an emergency exit seat, you’ve got these arms that have got these cables inside them. That’s actually quite a harsh environment to have a cable in because it’s twisting and bending all the time. So we are seeing that as new challenge to work with, as to how you can protect that cable better so it will actually get through its life without failing. So that’s the feedback we are seeing,” says the Gore executive.