The change “is due to revisions of certain systems and electrical configurations on the aircraft to meet the latest requirements for certification”, says Mitsubishi, though it expects the hours accumulated during test flights from Moses Lake, Washington – and the associated flight performance data – to count towards certification in terms of the external physics of the plane.

The delay is certainly bad news for launch customer ANA; it will now be forced to decide between slowing growth versus pursuing other aircraft options for its fleet.

For US regional airlines SkyWest and TransStates, the delay might not be as critical a problem. The two operators represent 150 of the 243 firm orders for the type and the current type specs will make it challenging for the MRJ to fly as a regional aircraft. US “scope clause” limits would preclude the MRJ from operating in the regional fleets of the major airlines SkyWest operates under as it is too heavy. That weight problem seems unlikely to be solved by the aircraft shedding pounds. And renegotiating the details of the scope clause to allow the heavier jet represents a major challenge for the airlines – one they are unlikely to undertake given the alternatives in the market.

Mitsubishi is acutely aware of the challenges the delays pose to its ability to add new customers and to maintain the orders currently on the books. In a presentation detailing the revised delivery schedule, the company acknowledges a need for “strengthening relations” with customers, partners and authorities. On the financial side it will lean on the overall health of the Mitsubishi Heavy Industries parent organization to help smooth the bumps that the MRJ program continues to experience. 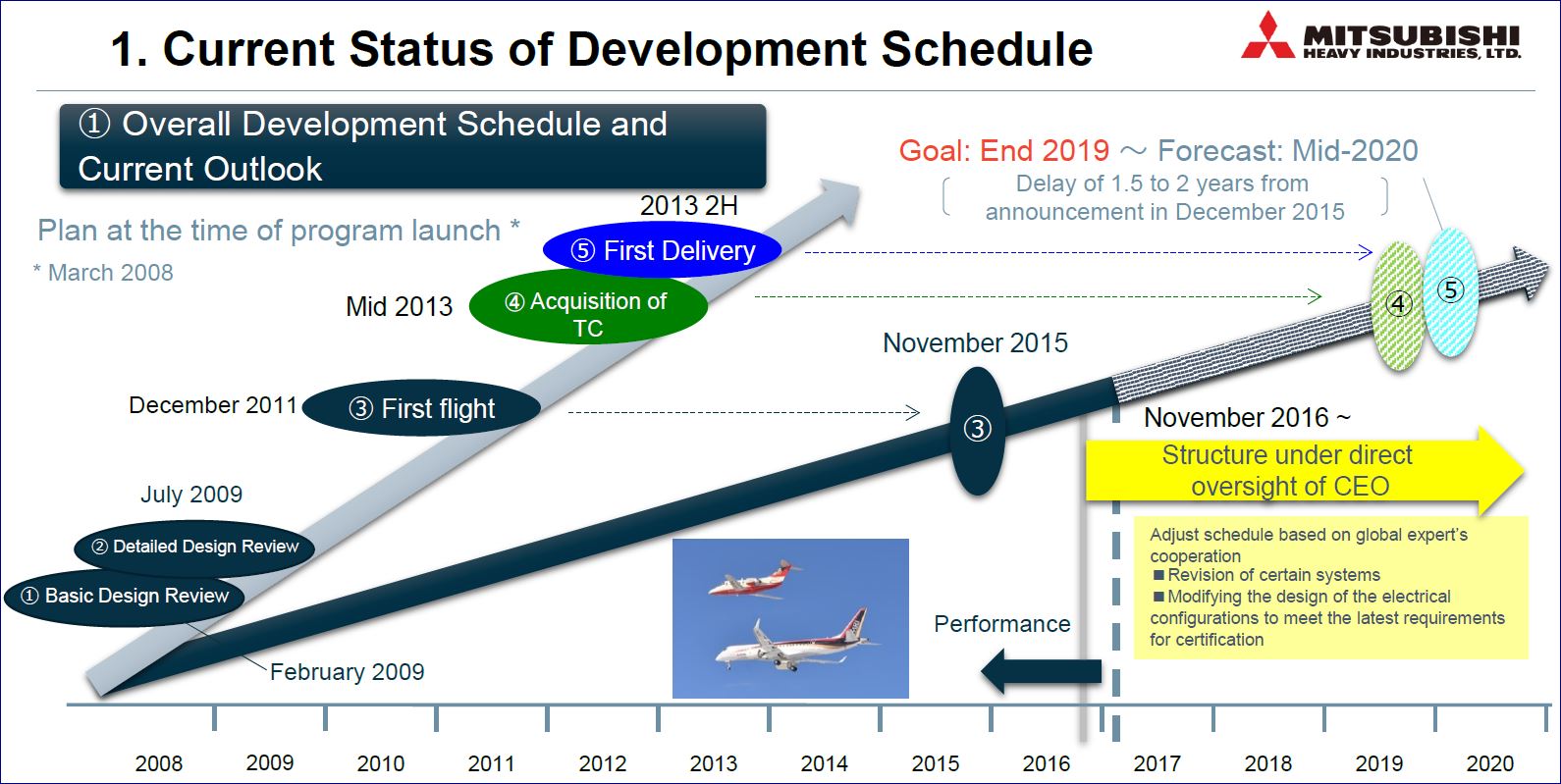 Mitsubishi’s latest 2-year delay for the MRJ program shows just how far the project has slipped since its launch in 2008. Image: Mitsubushi

Other airlines are not waiting to see what will come of the Pratt & Whitney geared turbofan-powered MRJ before ordering regional jets. Brussels Airlines recently committed to a deal with CityJet to take three Sukhoi SuperJet SSJ 100s, replacing its older Avros which are currently flying a number of shorter routes. Specific details on the routes the SSJ will fly for Brussels Airlines are not yet available.

Scandinavian regional carrier Wideroe will break with tradition and add jets to its turboprop fleet thanks to a deal with Embraer signed earlier this month. Three of the Brazilian airframer’s newest type, the re-engined E190-E2, will join Wideroe’s fleet in 2018. The deal gives Wideroe options on another 12 E2 jets from the 80-seat E175-E2 up to 130+ seats on the E195-E2. The three confirmed frames will seat 114 passengers in a single-cabin layout.

Mitsubishi’s position in the market was mostly about picking up outliers, smaller orders from smaller airlines willing to take a chance on a new entrant with big promises. And when the initial delivery was targeted for 2013 that risk to the airlines was relatively low. With the revised delivery target to 2020 – and pending a rework of onboard electrical systems – the risk may now sit in carrying those orders on the books even longer. Not that carrying them is necessarily a financial burden for SkyWest or others, but at some point reality must kick in. And the regional jet market remains as crowded as ever, with COMAC and Bombardier also aggressively working to close deals with aircraft certified and flying today.

The shift in cash flow from the MRJ delays does not appear to concern the company for now as it still expects the same revenue, just later in the process. Image: Mitsubishi

To fly, to buy: Taste-testing the new Marks & Spencer menu on BA