Lufthansa Systems today announced that it is developing dynamic navigation maps for its Lido/Navigation product line. A fully dynamic map solution is expected to be completed by 2019. With this development, the aviation IT specialist is responding to increasing digitalization and connectivity on the flight deck.

“Dynamic navigation maps are the future. They enable seamless navigation from gate to gate, without limits. Furthermore, connected systems can provide updates in real time and supply smart information that is only shown to pilots when they need it. This gives pilots a better overview, reduces their head-down time and helps them make decisions. It will also improve the display of integrated solutions for weather or other air traffic, for example,” said Stefan Auerbach, CEO of Lufthansa Systems. 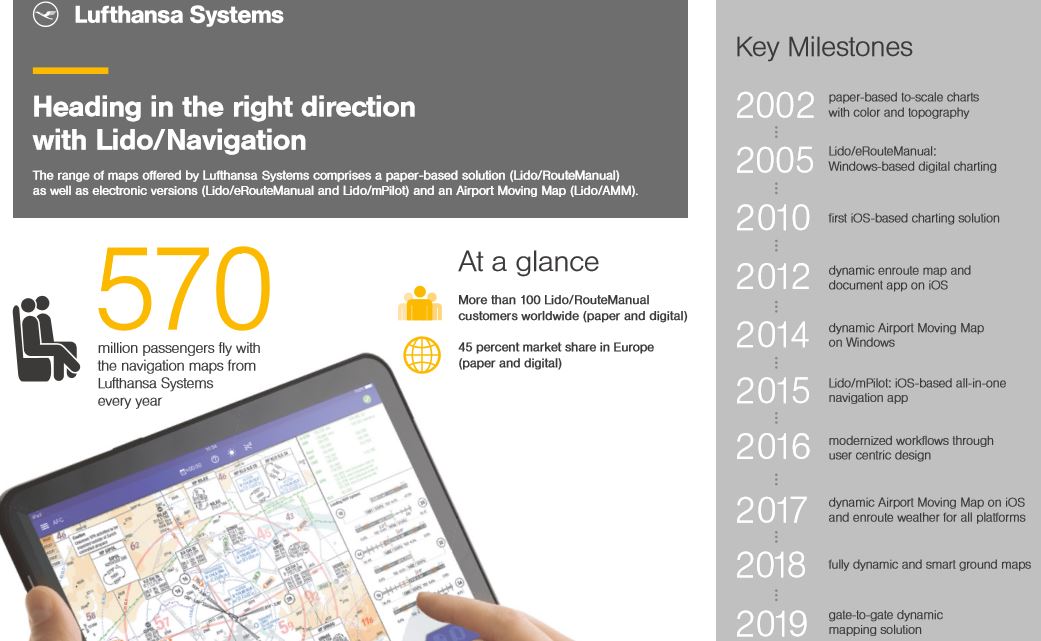 Lufthansa Systems is a pioneer when it comes to navigation solutions for airlines. More than 100 airlines worldwide use charts from the Lido/Navigation solution. The paper-based Lido/RouteManual charts were released in 2002, and in 2005 Lufthansa Systems began offering digital charts, initially for integrated flight deck systems, and now in the form of apps for Windows (Lido/eRouteManual) and iOS (Lido/mPilot). All of the charts are in color, directly display minimum safe altitudes on the approach and departure charts and include true-to-scale topographical information which meets the highest standards of precision and quality.

Unlike the route maps, the digital airport charts are largely static, and there is a separation between the terminal charts and the enroute module. In practice, this means that pilots use the terminal charts during takeoff and landing and then have to manually switch to the enroute module for the flight. The Lido/AMM Airport Moving Map, which is used to navigate between the runway and the gate, is already fully dynamic in itself, but it is still separate from the other charts. This dynamic approach is now gradually being expanded.

When all of the maps – terminal, enroute and airport – are dynamic, there will no longer be any separation between the maps for various phases of a flight. Pilots will be able to zoom directly from the enroute display into the Airport Moving Map, or move straight into the flight phase after takeoff. The advantage of this is that all flight processes from gate to gate can be seamlessly displayed in a single view. “Dynamic navigation maps are the basis for smart additional functions that will be available in the future thanks to connectivity. Through its connectivity with the aircraft, the system will be able to display the precise information that is important in a specific flight situation, thus increasing the pilots’ situational awareness,” Auerbach said.

This vision of dynamic maps and new developments for Lido/Navigation and the Lido/Flight flight planning solution will be presented this week by Lufthansa Systems at the 10th Annual Flight Operations Conference in London (November 29 to 30).

Images (copyright Lufthansa Systems): Vision visualized – in a video about the dynamic future of aviation navigation.

About Lufthansa Systems
Lufthansa Systems GmbH & Co. KG is a leading airline IT provider. Based on long-term project experience, a deep understanding of complex business processes and strong technological know-how, the company provides consulting and IT services for the global aviation industry. Over 300 airlines worldwide rely on the know-how of IT specialists at Lufthansa Systems. Its portfolio covers innovative IT products and services which provide added value for its customers in terms of enhanced efficiency, reduced costs or increased profits. Headquartered in Raunheim near Frankfurt/Main, Germany, Lufthansa Systems has offices in 16 other countries.