The FlightTracker service SITAONAIR has offered for about 18 months as part of its AIRCOM Server aeronautical telecommunications product line will introduce an automatic alerting capability for key weather updates within the next four months.

Paul Gibson, portfolio director for SITAONAIR’s AIRCOM product line, tells RGN that in teaming with FlightTracker partner FlightAware and Schneider Electric – which provides the weather data FlightTracker offers its airline customers – the tracking service will make automated weather alerting available “before the end of the year”.

The new capability will offer AIRCOM FlightTracker customers – of which there are now about 45 – alerting of weather data such as significant meteorological information (SIGMET) advisories; and ‘nowcasting’ and forecasting of turbulence conditions for clear air turbulence and convective turbulence.

CAT usually occurs within a narrow vertical range of altitudes and is often not visible on the weather radars of aircraft from long distances away, Gibson notes. So CAT advisories have traditionally relied mainly on pilot reports (PIREPS) from aircraft actually flying through CAT. But pilots reporting CAT in large, heavy aircraft such as the Airbus A380 may well experience CAT as being much less severe than do pilots in smaller aircraft such as A320s.

EDR turbulence forecasting is much more quantitative in nature than are traditional PIREPS turbulence advisories, in that it is an empirical measure independent of aircraft size. So EDR is useful to airlines and pilots in describing the actual strength of turbulence.

Although FlightTracker’s automated weather-alerting capability will be new, Gibson points out FlightTracker has been able to overlay more than 70 types of weather data (all provided by Schneider Electric) on its other alerts since SITAONAIR began operating the service. 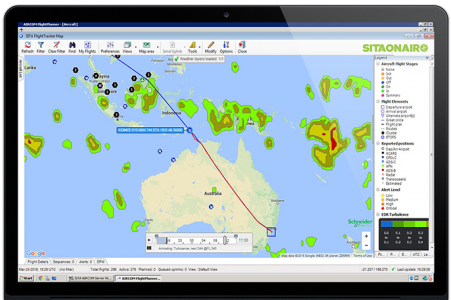 Malaysia Airlines and Singapore Airlines were tasked by their respective governments to perform 15-minute positional tracking of every aircraft in their fleets by summer 2015 (in MAS’ case) or 1 July 2016 (in SIA’s case). These two carriers were the first with which SITAONAIR worked to develop FlightTracker.

Its work with those carriers resulted in SITAONAIR and FlightAware releasing earlier this year a second version of FlightTracker, which included minor adjustments to the alerting standards the partners offered in the initial version.

According to Gibson, the adjustments provide “a lot more automatic alerting” to customer airlines’ operations control centers when position reports from any aircraft deviate from preset parameters – for instance, if an aircraft deviates from its flight plan.

“This is key for airlines like Singapore Airlines which are mandated [to track every aircraft in their fleets constantly] and need escalation actions if an aircraft hasn’t reported its position,” says Gibson. FlightTracker now provides SIA and other customers with automated escalation capabilities, including automatically informing specific airline departments and personnel when different types of automated alert are triggered.

“Alerting is configured by the airline based on several factors. If an aircraft does not report its position within the defined time window, then that will obviously generate an alert,” Gibson says. “However, the airline can also configure alerts based on the aircraft entering or leaving a defined geographic area; moving a defined distance from the flight plan, either vertically or laterally; diverting; or sending specified ACARS messages – e.g., a snag report.

“FlightTracker will automatically execute a sequence of actions depending on the alert raised, for example requesting more information from the aircraft – e.g., engine data, position report – and notifying airline staff.”

Gibson says the idea behind the structuring of FlightTracker to provide automated alerts is to let customer airlines “manage by exception” in tracking their fleets. SITAONAIR argues airlines cannot manually watch every one of their airborne aircraft all the time.

SITAONAIR’s ACARS network transmits all ADS-C messages generated by aircraft at the request of ANSPs. Since aircrafts operators own this data, SITAONAIR can copy these messages to help build its position-reporting plots for every aircraft it monitors for its customers.

This coordination allows FlightTracker to plot aircraft position, condition and behavior and update it as frequently as necessary to meet each customer’s required reporting standard. Alerts are triggered automatically whenever an aircraft deviates from any parameters set for it.

SITAONAIR currently provides its FlightTracker service over Inmarsat’s Classic Aero satellite communications service, as well as over VHF and Iridium. The firm is in discussions with Inmarsat over a potentially significant price increase to Classic Aero in 2017, as Inmarsat seeks to migrate airlines to its higher bandwidth SwiftBroadband Safety (SB-Safety) service. FlightTracker and SITAONAIR’s new weather-based altering functionality will work over Inmarsat’s SB-Safety.