A now well publicized FAA Airworthiness Directive that addressed cracking in the fuselage skin beneath a Boeing 777 satcom adapter has nothing too do with the actual antennas that support inflight entertainment and connectivity (IFEC) or their manufacturers, but is wholly related to the Boeing adapter, says the FAA.

Issued 5 March 2014 and effective 9 April, the AD required repetitive inspections of the installation and fuselage skin to assess whether a 16-inch crack found in an unnamed airline’s 777 was a one off. The FAA warned that cracking and corrosion in the fuselage skin, if not corrected, could lead to rapid decompression and loss of structural integrity of the airplane. The corrosion was due to a braided wire bonding jumper having insufficient clearance from the skin. The jumper wore into the skin; the skin corroded and a crack occurred.

Schematic of the problem area

When the AD was issued, it wasn’t immediately clear if any stakeholders in the IFEC market were impacted so we sought to close the loop on the subject. In an interview with RGN, FAA spokeswoman Alison Duquette clarified that it simply didn’t matter what the antenna was for. “The AD addresses cracking of the skin, not the antenna itself. This has nothing to do with the manufacturer or the type of use of the antenna,” she said. She added that “the Boeing 777 satcom antenna adapter is the current common adapter for all installations” and that Boeing had developed a fix for new-production 777s.

The AD followed a Boeing Service Bulletin issued eight months before Malaysian Airlines Flight MH370 went missing, and drove a host of theories and conjecture in the weeks after the 777’s disappearance, including decompression and crew disability owing to hypoxia. Indeed, early on, general-assignment press reported on the AD, but not on the fact that –  according to Boeing – MH370 did not have the optional installation. This helps to explain why some travelers are still concerned about whether or not MH370 was directly impacted by the AD.

Affecting 120 aircraft, the AD specifically required repetitive inspections of the two- and three-bay satellite communications antenna adapter plates located in Sections 44 and 46 where fretting and damage to the fuselage skin finish leave it vulnerable to corrosion and cracking. 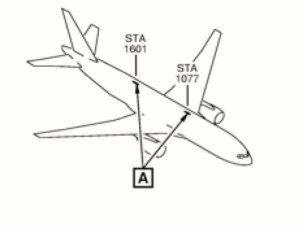 Neither Boeing nor the FAA disclosed which 777 operator found the 16-inch crack, but the undisclosed airline inspected 42 other aircraft in its fleet between six and 16 years old and found no other incidents of cracking, though it did find corrosion.

The largest 777 operators in the US (with more than 35 in fleet) are American Airlines and United Airlines. Both carriers are customers of Panasonic Avionics’ eXConnect Ku-band connectivity system. See where the antenna structure sits on American’s 777-300ER here and here. American provided comment to the FAA when it issued a notice of proposed rulemaking on the satcom adapter issue.

The AD requires operators to inspect and repair as necessary as well as schedule inspections based on the age of the aircraft. In addition, inspections will continue, according to the FAA, until operators install a new bonding jumper design.

We asked the FAA if it is concerned about the safety of other types. “No. Boeing studied all their other airplane models to see if a similar problem existed. The Boeing 777 SATCOM antenna adapter is the only one affected,” said Duquette.

A380 delays come as galley engineering constraint is apparent