“In this age of constant and ubiquitous data connectivity, does it still make any sense that when a plane crashes, days or weeks of speculation ensue until the we can even begin to formulate a hypothesis on what happened – if the plane and the black boxes are ever found and handed over to independent investigators AT ALL?”

Today, as the world tries to come to grips with the knowledge that yet another aircraft has crashed – Air Algerie AH5017, which dropped from radar many hours ago – it seems clear that the industry should give honest consideration to enhanced real-time flight data monitoring and black box streaming.

IATA/ICAO have been weighing various flight tracking options since MH370. But they’ve made it clear they’re not considering streaming solutions. “Data streaming is down the road – there are hurdles to storing it and making sense of it – but that doesn’t address your ‘finding the airplane’ issue. That simply addresses a different question,” IATA head of corporation communications, the Americas Perry Flint told RGN in April.

So what’s on the table?

Inmarsat is offering a ‘free tracking’ service that consists of one free ADS-C position report every 15 minutes to the 80% of widebody transoceanic aircraft that are already FANS (Future Air Navigation) equipped. It is also willing to add position reporting within the Inmarsat ‘handshake’ with its satellites for the 20% of widebody aircraft that are not FANS compliant and may ask for it.

This widebody install base is nothing to sneeze at, though conversation about Inmarsat -supported tracking must involve SITA and ARINC because they act as service providers, and indeed SITA has presented a tracking proposal to IATA/ICAO. The SITA AIRCOM Server Flight Tracker solution uses already long-haul requisite ADS-C in concert with ACARS, but expands ADS-C request capability into the hands of airlines.

Solutions that operate via Iridium’s global constellation of satellites have also been proposed to IATA/ICAO, including FLYHT’s streaming data system over Iridium and Panasonic Avionics’ FlightLink offering. Iridium, meanwhile, has also proposed that the industry consider its space-based ADS-B service, Aireon, as back-up “surveillance”. ADS-B equipment will be mandatory by 2020 and is being line-fit on all new Boeing/Airbus aircraft, which helps to underscore the argument for Aireon.

Yet, with the exception of FLYHT’s solution, these aforementioned proposals don’t necessarily answer the original question. And ACARS and Iridium can only support circa 1980s/1990s data rates. So we must ask ourselves again – in our highly connected world, shouldn’t black box streaming or something akin to it be sought? And truly, isn’t it somewhat galling to consider that even though thousands of aircraft are currently fitted with broadband connectivity pipes, their primary purpose is to support passengers’ entertainment and use of the Internet, though they could be used for that and so much more?

What if onboard flight data systems could utilize the new broadband links in-flight? This is a controversial question to ask, as I learned in the immediate aftermath of MH370, and yet aerospace company Teledyne Controls has been banging on the doors of major inflight entertainment and connectivity firms and other stakeholders to open up the discussion for some time. 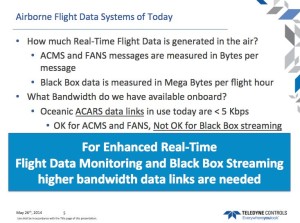 Noting that sophisticated Aircraft Condition Monitoring System (ACMS) and ACARS together already support limited real-time flight data monitoring today, Teledyne Controls suggests that higher data links are needed to support enhanced monitoring and black box streaming. “Why are we waiting to get data so late, two or three weeks [after a crash], why not get it immediately? You need more than ACARS,” said Teledyne Controls director, business development, wireless products William Cecil when he made the case for using broadband during a two-day conference in May facilitated by the International Telecommunications Union (ITU) and hosted by the Malaysian government.

Boeing, Airbus, and airlines are already looking to move aircraft health monitoring data over Ku and Ka-band pipes. Panasonic Avionics is studying a scenario whereby it pulls weather data from aircraft over Iridium; uses this data to create graphical weather reports on the ground; and then pushes dynamic reports to flight crew in the air via Ku-band connectivity, says company director Jeff Rex. And Inmarsat has suggested that eventually it could  potentially “slice off” a part of Global Xpress Ka to move more critical data over the pipe, and that “you can monitor everything and it would cost pennies”.

I mention the work being done on the health monitoring front as a means of suggesting that Teledyne Control’s proposal is certainly not outrageous by any stretch. Certainly, systems capable of IP data routing and intelligent data transmission to the ground would need to be exploited, and myriad security concerns would need to be addressed. “The concept of multi-layer firewalls is coming up, and another concept which started in the military is the concept of Defense and depth. It’s not just a single firewall, there are lots of them; it has to be established that it’s a safe environment before transfer takes place,” says Cecil. But these are not insurmountable obstacles.

Meanwhile, a more pressing question needs to be answered by industry and regulators now. “With three incidents within two weeks — MH17, GE222 and AH5017 — passengers are wondering whether it is safe to fly. The industry’s standard response is to highlight how much safer flying is than driving, walking down the road or even staying at home. But there is actual, legitimate anxiety about giving up control when someone gets on a plane. “Fear of Flying” courses deal with it on a one-on-one basis. It’s time for the industry to deal with it more publicly. Reassuring passengers when they’re concerned, rather than dismissing their anxieties as irrational, is a good idea,” says aviation journalist and pundit John Walton, who provides breaking news updates and analysis on aircraft crashes via his @ThatJohn Twitter handle.

How much would you pay for one hour of inflight Wi-Fi?