Lightweight slimline seats may be all the rage with airlines, but at what point do seating dimensions stop being just a matter of comfort and start becoming a safety concern, especially as passengers grow in girth and height?

The Runway Girl Network is eager to find out. We’ve been carrying out a comprehensive review of the implications to passenger safety of the established standard measurements for seat designs, higher passenger load seating configurations, and seat restraints, including the airbag equipped restraints we discussed in a recent exclusive article – these allow for new seat designs and greater proximity to bulkheads.

Since the standards of aviation design and testing are specific and measurable this should be an easy question to answer, right? As it turns out, because of a number of variable factors and dependencies on reference “percentiles” of the population which are not universally defined, we’ve entered murky waters.

One reply received this week from the Civil Aviation Authority (CAA) in the UK actually raised more questions than it answered. In response to our question about whether Anthropometric design and testing of seats is in keeping with the increasing size of the general population, we were told:

“You will doubtless have seen CAA’s study on behalf of JAA, this is our most recent study (and was quite a few years ago). Whilst a simple study of body sizes will indicate that there may be limited comfort in some economy class seating for larger or smaller passengers, CAA regulates safety, comfort is a more a consumer choice. CAA would take appropriate action if it believed that the seat spacing had safety implications e.g. would be likely to slow aircraft evacuation in an emergency.” 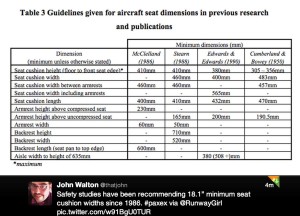 On the surface, this might seem like a reasonable reply, and in many ways it is. However as we had not previously heard of the above mentioned study, and as the CAA did not provide us with a copy in their reply, we decided to dig around and find it. The Anthropometric Study to Update Minimum Aircraft Seating Standards prepared for the Joint Aviation Authorities by Claire Quigley and Dean Southall of ICE Ergonomics Ltd., Martin Freer and Mark Porter of Loughborough University, and Alan Moody of Nottingham Medical School was published in 2001. As the CAA said, “quite a few years ago”.

The report is lengthy, detailed and reasonably comprehensive, though we found it carefully worded so as to not generate great controversies with possible commercial implications; numbers are numbers and difficult to dispute.

“It is widely recognized that where safety is concerned the range should be increased to cover the 1st percentile to 99th percentile range. Using this range will also ensure that the gradual increase in people’s sizes, which can be anticipated within the lifetime of any JAA regulation, is also accommodated,” the report states.

Their findings include some statements with safety implications which would require review:

“..an additional 25mm (1”) of knee clearance to the back of the seat in front..should be afforded to ensure that the knees do not contact the seat in front (i.e.. the passenger should not be jammed in) and to improve ease of access/egress..”

“The randomly selected sample of economy class seats measured for this study did not provide adequate space between armrests, which would result in larger passengers having great difficulty getting in and out of their seats.  A minimum width of 497mm (19.6″) is recommended between armrests (ideal=584mm (23″)).”

The study expressly recommends that further work be carried out to evaluate the established standards for a number of seat elements, and makes a provocative statement in its conclusions:

“[I]t was evident that the current minimum requirements were in need of review, as the data was now outdated due to changes in secular growth, increases in the ageing population and increases in the proportion of overweight people in the Western world. It was also clear that a number of other minimum dimensions, which would help to improve seat spacing and ease of access/egress, should be considered, in particular seat width, height and length, and armrest position.  When defining new minimum dimensions, consideration should be given to using the 1st and 99th percentile data as opposed to 5th and 95th percentiles, particularly where there are large differences between 1st & 5th or 95th & 99th and when regarding safety issues (e.g. clearances for evacuation).”

Note again that the study was conducted in 2001 and already the report believed the baseline data supplied was outdated. So what happened? We want to know too. We have posed the same questions to the FAA and EASA and are awaiting replies which will further clarify matters. We are also pursuing other parties who make determinations on the standards for seat design and testing in aviation.

It should be considered that 2001 was the year of the 9/11 attacks, which left the aviation industry significantly in peril both practically and financially. The focus of the industry shifted entirely to the more pressing safety and security concerns. It is therefore understandable that reports such as this may have accumulated some dust over the years, but thirteen years on it is time to take out the dust brush.

UPDATE: Tortoise and the hare?