Perhaps the most harrowing news about the two serious turbulence-related incidents this week which resulted in serious or critical injuries for those on board was this headline: Baby Sent Flying, 5 Hurt When Plane Hits Turbulence. While the child was not injured, the headline, alone, was a heart-stopping moment.

“I bet that parent is rethinking the decision on whether or not to buy a seat and use a child safety seat, after that,” one mom commented upon hearing the news. “Is the cost of a seat worth my baby’s life. The answer is decidedly not.”

But that begs the question as to why parents are not required to buy a seat and use a Federal Aviation Administration (FAA)-approved child safety seat. It is a good question. After all, the Future of Aviation Advisory Committee (FAAC) cited the fact that use of child restraint systems could have prevented three infant deaths in the past 32 years.

But it also highlights the role of passengers in ensuring their own safety and that of their children. While tips on what passengers can do to remain safe while flying was covered in a previous article, the child safety debate was renewed with the reports of the two clear-air-turbulence incidents.

Clear skies, no warning, major upset. That is why passengers are advised to keep their seat belts on at all times when seated. And it is why flight attendants are usually the ones seriously injured in such incidents.

The International Air Transport Association (IATA) says it is looking at having discussions in order to promote the harmonization of regulations related to child restraint devices on board in order to promote their use and to do this in a rational, coordinated and cost effective way. IATA will address this and many other cabin safety issues at its first Cabin Operations Safety Conference in May in Madrid. Runway Girl Network is proud to be a media sponsor of this event.

“We have always said that the safest place for a child is in a child restraint not on a parent’s lap,” says FAA Spokesperson Allison Duquette, who has long covered this issue. “But we are required to do a cost/benefit analysis for each rule and it would never pass the cost/benefit test. Air travel has become increasingly safe and we haven’t had one single child death from turbulence in 17 years.”

There are child restraint systems on the market but the question then becomes whether or not they are FAA approved. 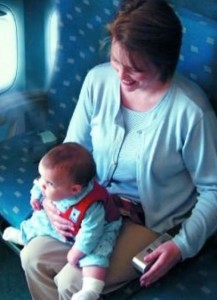 Baby B’Air, pictured above, is frank about the fact that it is not FAA approved since such approval is largely restricted to approved car seats. The FAA has actually banned non-FAA approved devices during taxi, takeoff and landing. The manufacturer, however, says the FAA action does not prohibit its use during cruise and it is working on gaining approval. 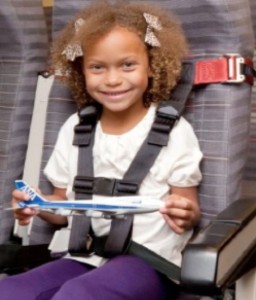 CARES Child Airplane Travel Harness, on the other hand, is FAA approved for children between 22 and 44 pounds or one year or older. It is the only FAA-approved alternative to a car seat, the company says. See a picture of this restraint above.

In an update to its cost/benefit analysis in 2012, the FAA concluded that requiring the use of a child restraint system (CRS) would increase total transportation deaths by 72 over 10 years and by 115 deaths over 15 years. Why? Because flying is the safest form of transportation, safer by 83% in the last decade. The cost of an additional seat might make parents drive, a far less safe form of transportation.

The National Transportation Safety Board has recommended a rule requiring children under two be in a child restraint system in a separate seat. Former NTSB Member John Goglia, who we quoted in our previous article, reiterated his recommendation in a piece he wrote for USA Today, saying that parents’ arms are not strong enough to hold a child during turbulence.

“Until the FAA mandates proper restraints for all passengers, including those under the age of two, parents may think it’s safe to hold a lap child,” he wrote. “But it’s not….an unrestrained child flying through an aircraft cabin could cause significant injury to both the child and the other passengers.”

The issue has been studied and in fact the Federal Aviation Administration has done quite a bit given its inability to regulate this issue. Indeed, the FAAC cited the agency’s multiple efforts in its 2012 report which included child safety issues. Its recommendation was to make parent education a priority when it comes to traveling with children.

In 2011, according to FAAC, the FAA partnered with the Association of Flight Attendants (AFA) in holding a media briefing designed to educate passengers on what they can do to enhance their own safety. It also teamed with Toys ‘R’ Us in the distribution of FAA’s child safety recommendations online and in stores. The FAA’s website also includes child safety tips, as well as links to child restraint and Child Harness Devices (CARES). In addition, the agency’s  summer travel announcements cover children’s safety. Finally, AFA and FAA teamed to develop a child-safety video and takes to social media to help educate parents.

In 2012, the agency redoubled its efforts as part of National Transportation Week, launching a new effort to educate parents to help them make informed decisions when traveling with children. The effort brought together the AFA, Airlines for America, Consumers Union, Parent Media Group and the American Academy of Pediatrics to work to share safety information with parents and caregivers. The FAA also called on child safety advocates and media to help educate parents by publicizing or linking to the FAA’s Child Safety web page.

The safety of air transportation means parents will “take a chance” when they fly with lap children. But, knowing the dangers may prompt more to buy seats and use child restraint systems. Just because there isn’t a mandate, doesn’t relieve parents, or any other passenger, from the responsibility in seeing to their safety.