Zodiac’s three-dimensional Aries product is enabling Japan Airlines to add eight fully flat seats with direct aisle access to its Boeing 787-9 aircraft compared with the previous generation of staggered seats, on an aircraft that remains one of the most comfortable ways to fly in every cabin of service — and reminds us all of the #PaxEx dream that Boeing’s Dreamliner could have been.

JAL’s new layout for its 787-9 is coded E91, with the primary changes meaning an addition of eight fully flat business class seats with direct aisle access on what is essentially the same footprint in the cabin compared with the previous E71 version, which used the original Sky Suite-branded Apex staggered fully flat product from B/E Aerospace, now Rockwell Collins. It’s a fairly early change to the business class on board given the life of the aircraft and the durability of the Apex product, but the promise of eight more business class seats to sell on every flight is a compelling reason to make the change.

The seating in business class is an evolution of the product that JAL first installed early last year on its international 777-200ER aircraft, only optimised for the 787’s smaller fuselage. JAL’s Sky Suite III is Zodiac’s Aries product, an evolution of its Cirrus product, where one of the centre pair of seats reclines lower to the floor than the other in order to enable a space-saving stacking effect on narrower fuselages like the 787’s.

As far as 3D products go, JAL’s Aries implementation is basically invisible to passengers compared with Cirrus, and works out well in terms of dimensions: this six-feet-six-inches bed starts out at 21” but stretches to 29 when the armrest is stowed.

JAL’s 52-seater business cabin — one of the largest in business class on any Dreamliner — is being rolled out in response to what it calls “robust corporate demand on medium- and long-haul international routes”, with the airline intending to begin rollout this July on the 7h15 Tokyo Narita-Kuala Lumpur route six days a week, with a single 3h10 hop to Dalian in China once a week, presumably for operational rotation reasons. JAL notes that the new cabins will be “progressively expanded onto the other international routes”. 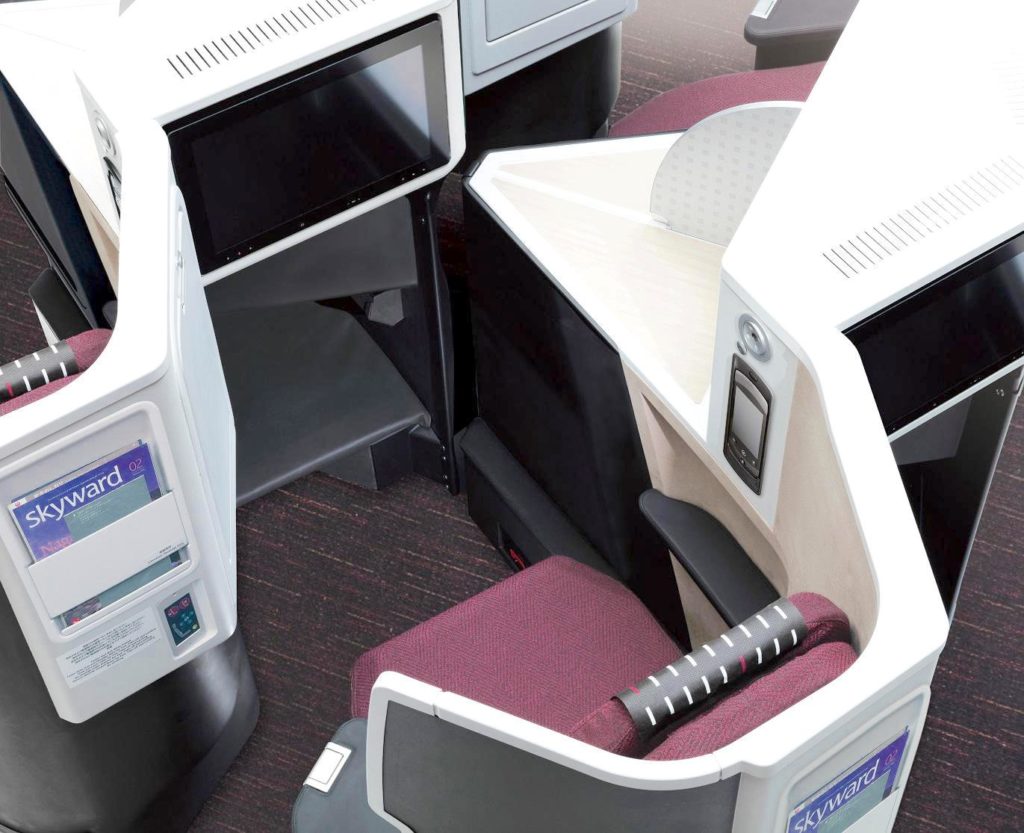 Adjusting the shadows on JAL’s press image highlights how the stagger works for Aries. Image: JAL

Interestingly from an interiors point of view, the use of the Zodiac Aries product also seems integrated with the sculpted space-saving bulkhead monuments that Zodiac has been offering for several years now, which enable additional stowage for trolleys, as well as double the baby bassinet options compared with JAL’s older seatmap.

The airline’s well-received 2-3-2 premium economy section fills the rest of the space between doors 2 and 3, and the 2-4-2 economy class section — with JAL remaining the only airline in the world to offer spacious, comfortable seating in economy on its Dreamliner fleet — makes up the rest of the aircraft, from doors 3 to 4.

In context, it’s fascinating to see JAL continuing to push the passenger experience boundaries. Smart optimising decisions like Aries — essentially a #PaxEx neutral, although some business class flyers will miss the spacious Apex product — combined with a world-leading 42” of pitch in premium economy and the biggest Dreamliner economy seats on the market (33” of pitch and 19” of width) position the carrier as an airline of choice in its markets, at a time where domestic and international low-cost carrier competition is heating up.

JAL is never going to beat AirAsia X and the latest iteration of AirAsia Japan on costs or on the race to the bottom of the passenger experience barrel. But with its impressive premium class options, omotenashi — the Japanese concept of hospitality and service — and the best Dreamliners in the sky, it certainly beats them on experience.

This article has been edited to correct the name of Zodiac’s Aries product.