Competition is heating up in aviation’s regional satellite connectivity market, with Abu Dhabi’s Yahsat gearing up to trial a Ka-band service on an Etihad Airbus A320.

ViaSat is, of course, familiar with Yahsat after a 2011 deal fell through and the Emirati company teamed up with competitor Hughes.

So is ViaSat worried about competitors emerging in regional pockets, given that it provides Ka-band connectivity for El Al over the Eutelsat KA-SAT system? And given the fact that ViaSat is seeking to stitch together regional Ka for a near global offering?

“Of course it’s a new player on the market,” ViaSat vice president of commercial mobility Don Buchman tells RGN. “Their beams are very limited, just in the Middle East and over to southwest Asia, so they’re not covering a giant area. But it’s good to see others saying ‘hey, this is high capacity, we can make a go of it as well’.”

Technologically speaking, Yahsat operates both the Yahsat 1A (14 C-band transponders, 20 Ku-band and 21 Ka-band) and Yahsat 1B (60 Ka-band transponders and 60 spot beams) satellites. Both were manufactured by an Airbus-Thales-Alenia consortium, and offer commercial and military services. Yahsat offers a wide variety of services, but its YahService product “offers end-to-end managed solutions to customers from both governmental and commercial sectors covering land, air, and maritime platforms” and has a significant coverage area. 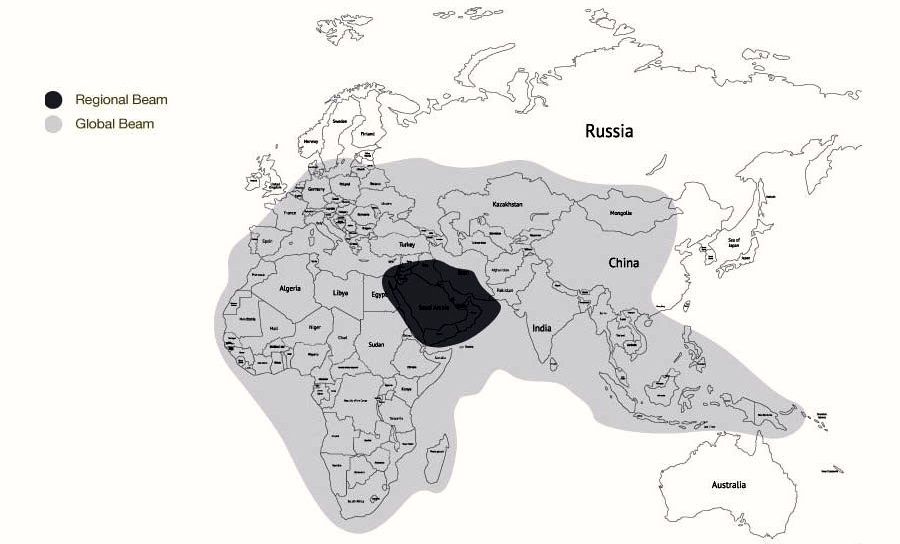 Speaking of Yahsat’s Ka-band capabilities, Buchman characterized them as “spot-beam satellite, similar to ViaSat-1 but not nearly as capable. But imitation is the most sincere form of flattery — there’s a lot of smart people saying ‘ViaSat is making a go of it with their satellites, let’s see what we can do there’.”

Yet even within this restricted geography there is an opportunity for regional players to get involved, either with or without coverage extending options such as a dual Ku-Ka antenna like ViaSat’s. In an interview with Get Connected, Yahsat CEO Massood said Yahsat was looking at a number of options including different configurations, dual Ku/Ka-band antennas and coverage, and potential partnerships with others in the sector.

Buchman characterized the opportunities for Yahsat’s connectivity in the context of the Gulf being “mostly a longhaul destination. There’s a big hub there between Europe and Asia, and it’s kind of a crossroads.” Yet Buchman also acknowledged that there are smaller operators, including narrowbody LCCs.

The route networks of Air Arabia and nasair would certainly seem to lend themselves to a regional operation, much as JetBlue’s doesn’t require a global service. Flydubai has already signaled its intent to use Global Eagle Ku.

Clearly, that kind of regional operation is exactly where ViaSat got its commercial start in inflight connectivity.

More widely, the success or failure of Yahsat’s venture could be the genesis of a new trend, given the increasing maturity of the technology behind connectivity. Indeed, it’s entirely possible that Eutelsat, ViaSat’s partner in the El Al deal – and LiveTV/Thales partner in the Vueling deal – might be exploring something similar.

RGN has sought comment from Eutelsat on its plans.