Virgin Atlantic is pulling its unique staggered herringbone 2012-released Upper Class Dream Suite business class seats off its Airbus A330 fleet and replacing it with an updated version of its 2003 product, which was the first fully flat business class bed with direct aisle access.

It’s a surprising climbdown for the airline after just three years in service with the Dream Suite, which it had originally intended for the Boeing 787 Dreamliner as well.

“We have taken the decision to reconfigure the Upper Class cabin on our A330 fleet to bring it in line with the 787,” a Virgin Atlantic spokesperson confirmed to Runway Girl Network after frequent flyers flagged the change on private FaceBook forum, “I love sitting in 1st/biz class”.

“This will improve consistency of experience for our Upper Class passengers and give more of them the opportunity to enjoy a product which has received excellent feedback from both our customers and our people on the 787.”

The spokesperson promised “more details on look and config to be revealed in due course,” but the story is one with wider ramifications for the passenger experience side of the aviation industry.

The Dream Suite was created to fix a problem: the existing Upper Class Suite, created for a 1-2-1 configuration in the main cross-section of the Boeing 747, wasn’t dense enough to compete economically on the narrower fuselage of the A340 and A330 — especially with British Airways’ Club World product, which went fully flat but didn’t (and still doesn’t) have direct aisle access. 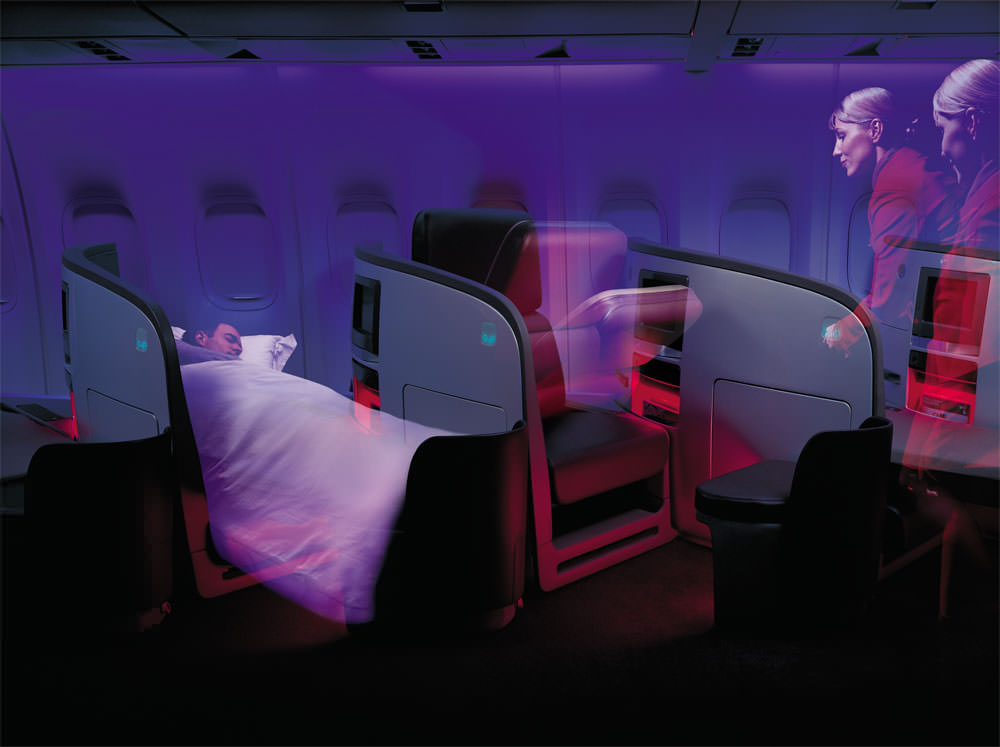 On the 747, the original suite is nice and wide

The problem was fairly immediately apparent (as I spotted on the first media flight of the new seats): they were too dense, the centre versions were too short, and there wasn’t enough storage. Overhead bin space was particularly a problem in the denser cabin given the A330’s smaller bins and Virgin’s decision not to install centre bins for aesthetics.

Oh, and the seats were so delayed that they couldn’t make the 2011 delivery of the first A330s, which were quickly shipped off to China Airlines in Taipei for a lease with a temporary economy class section where Upper Class should have been, while other A330s were hastily added to the leisure fleet with just premium economy in the pointy end.

The seats didn’t exactly excel on installation either. I recall my crossed leg slipping off my knee and knocking off one of the ottoman’s plastic moulded side panels as the first A330 lined up to leave New York JFK just a couple of days into its operation. Red faces all around there, although mine did feel a little more green in the style of the Incredible Hulk. (#PaxEx Hulk smash!) 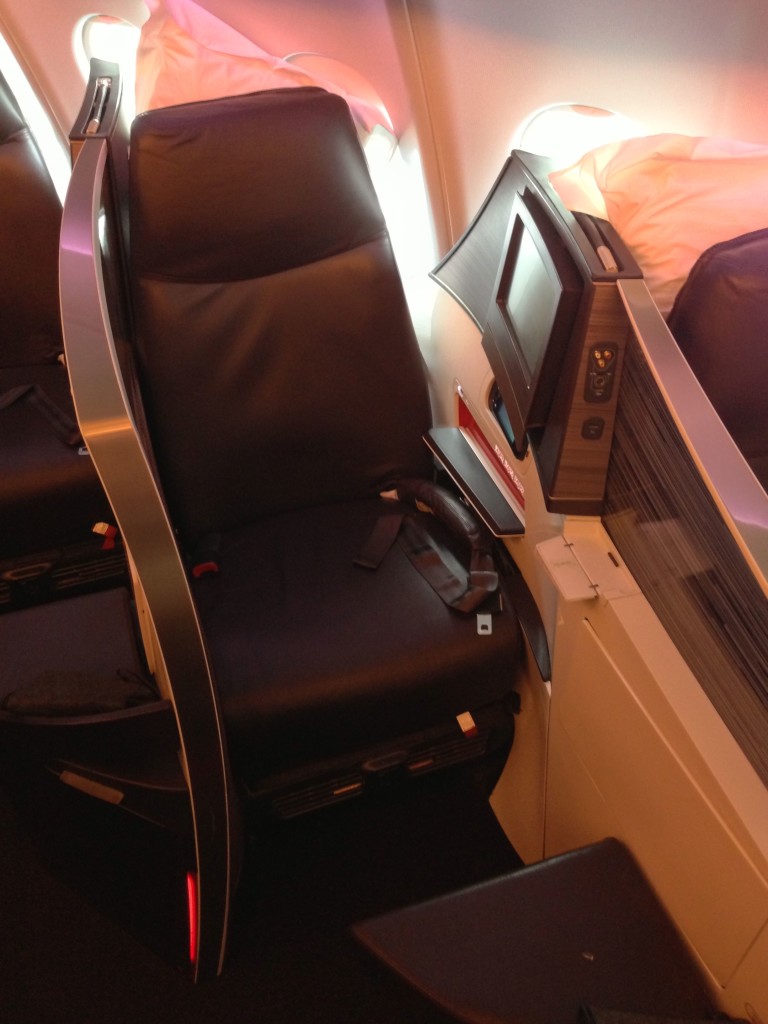 The A330 product is not a wide seat

It will be interesting to see how Virgin Atlantic plays the refit, since it has a few options available to it. At present, the seat comes in two sizes: large, which is used in a 1-2-1 layout on the 747 and Air New Zealand’s 777 fleet, or small, which is used in a 1-1-1 configuration on Virgin’s A340 aircraft. The most noticeable difference in the larger version is width, and many virgin Virgin Atlantic flyers whose first times were in the small version found it baffling that so many people liked the product — since those people had experienced it on the larger 747. 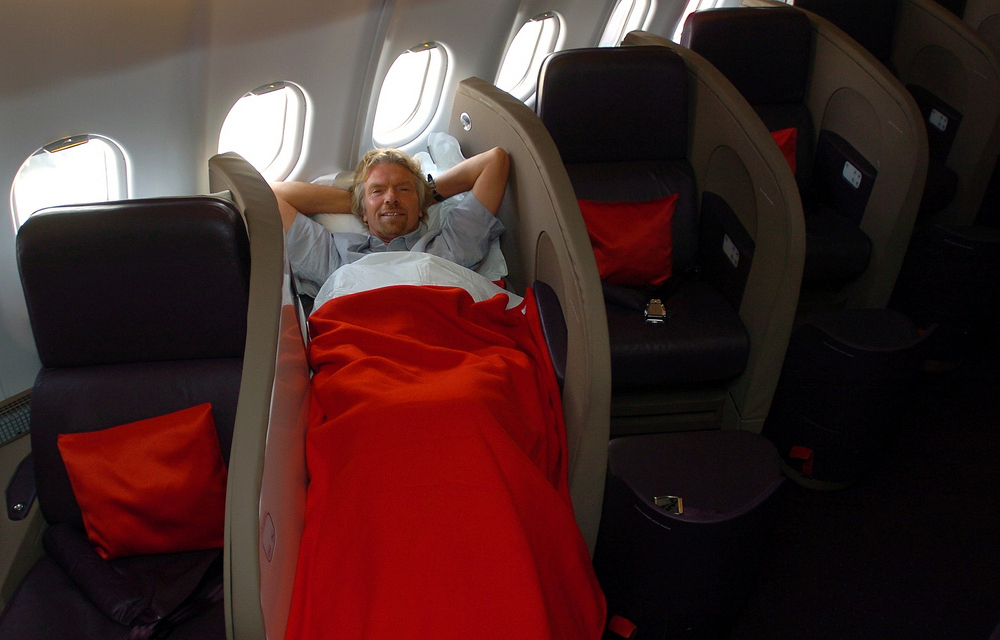 Richard Branson, not a large man, highlights the narrow problem with the smaller A340 seat

Will Virgin Atlantic re-engineer the smaller shell into an up-to-date version — with modern IFE, AC power outlets and USB sockets? Or will it find product commonality across its future fleet of 787, A330 and lingering 747 aircraft too tempting to resist? The spokesperson’s comment about consistency and the 787 would suggest the larger version.

Another option, possibly complementary: in the age where 24° seats are possible — though, as both Zodiac and B/E Aerospace have found recently, hard to certify — will Virgin increase the angle away from the centreline on the A330 fleet? In replacing the Dream Suite, Virgin Atlantic needs to be certain that it doesn’t create a nightmare for itself.